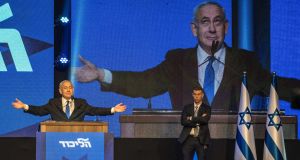 Everyone is asking the same question and, at this juncture, no one knows the answer. The question is simple: Is Binyamin Netanyahu’s political career over?

The answer is complicated, but one thing is clear: he’s not going without a fight.

On Wednesday, the day after the Israeli election, he convened the leaders of the right-wing and religious parties to shore up support for a new coalition and vowed to seek the formation of a “new Zionist government” that excludes Arab parties.

“There will not be and there cannot be a government that leans on Arab, anti-Zionist parties,” Netanyahu said.

Tuesday’s election marked a significant setback for Netanyahu. His gamble to call a snap poll after failing to form a coalition following the April election backfired.

The final tally of votes (barring the soldiers’ ballot slips, which are being counted on Thursday) showed that the centrist Blue and White, led by Benny Gantz, edged past Netanyahu’s Likud to emerge as the biggest single party (32-31).

Even more worrying for Netanyahu is that his natural coalition of right-wing and religious parties has far fewer Knesset members prepared to recommend Netanyahu as prime minister than after the April vote. The left-wing/centre bloc (if we include the Arab Joint List) is supported by 56 Knesset members, compared with 55 for the right/religious bloc.

Critical to the calculations is the fact that Yisrael Beiteinu, led by former defence minister Avigdor Lieberman, although solidly right-wing, is no longer in Netanyahu’s pocket. Without Lieberman’s endorsement, both Likud and Blue and White fall well short of securing a parliamentary majority with ideological allies.

With nine seats, Lieberman has emerged as the coalition kingmaker. He insists on a secular unity government between Likud, Blue and White and Yisrael Beiteinu. This is not a problem for Benny Gantz, but Netanyahu is loath to break up the Likud’s decades-long alliance with the right and religious parties.

“A national unity government, a broad liberal government. We will not join any other option. From our point of view no other option exists,” Lieberman made clear.

Netanyahu has a date with the attorney general in a fortnight for a pre-trial hearing on three separate corruption charges involving gifts from businessmen and quid pro quo agreements for favourable media coverage. He wanted to attend the meeting with a fresh mandate from the people – a message that they agree with him that the allegations are part of a left-wing witch-hunt aimed at toppling him from power.

He will now attend the meeting as a weakened politician with a huge question mark over his future. His reported plans to fast track legislation granting him immunity from prosecution now seem like a distant dream.

But he hasn’t thrown in the towel yet, and in the past has been a master of political manoeuvres that have left his political opponents in awe.

His aim now is to build a coalition of 61 Knesset members to thwart the option of a Gantz-led government.

Initial overtures to the left-wing Labour party were rebuffed on Wednesday when Labour leader Amir Peretz dismissed the possibility of joining a Netanyahu-led coalition.

President Reuven Rivlin will task one of the party leaders with forming a coalition next week after he hears the recommendations of all the parties. The candidate will have 28 days to complete the task.

Mr Rivlin has promised to do everything he can to avoid another election, the third within a year – an inconceivable prospect for politicians and the public alike.