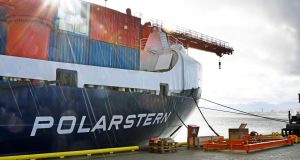 The German icebreaker and research vessel Polarstern: embarking on a $150 million dollar expedition to the Arctic. Photograph: Rune Stoltz Bertinussen

If Jules Verne was documenting the voyage of the Polarstern – the Polar Star – he would probably dub it “365 Days in the Endless Ice”.

But there was little time for hyperbole as an international team of researchers departed by sea on Friday for a year-long Arctic study voyage. Their aim: to document in more detail than ever before the climate of the Earth’s most extreme environment – and its changes due to man-made factors.

The journey comes at a symbolic moment: as world leaders head to the United Nations to debate climate change next week, and Greta Thunberg’s Fridays for Future gears up for its largest-ever worldwide strike on Friday.

The mission, involving hundreds of researchers from 70 scientific institutes in 17 countries, will be focused on the research vessel owned by Germany’s Alfred Wegener Institute, a centre for marine research at Germany’s Helmholtz Centre.

After final checks in the Norwegian port of Tromsø on Thursday, the ship heads off on Friday towards what lead researcher Markus Rex calls the “climate cooker” for Europe. The Arctic contributes hugely to the main wind and other weather for our continent, but he says it is also the “epicentre of climate change” because no other part of the planet is warming up faster than there.

“We know that it is warming dramatically and we have forecasts that this warming will continue in the future, no question,” said Prof Rex of the Alfred Wegener Institute. “The insecurities are still quite high . . . but I’m sure we will achieve a breakthrough in climate research.”

To get to the Arctic in an environmentally friendly manner, the ship will follow the example of Norwegian Polar explorer Fridtjof Nansen. During his own polar expeditions from 1893 to 1895, he mapped the polar drift of Arctic ice-flows based on the east-to-west currents in the region. To save fuel, the Polarstern will head to a part of the Arctic that is most accessible now, wait for the ice to freeze around the ship, then drift with the currents to the North Pole.

Five icebreaker ships will bring food, fuel and other supplies over the year to the ship, which can hold a crew up of up to 44, plus up to 55 researchers and technicians. There are nine labs on board, kitted out especially for each mission, as well as a surgery and surgeon and two helicopters.

Besides working and eating, the crew have a few luxuries on board: a sauna, a pool and a gym to stay in shape and keep depression at bay during winter months of almost complete darkness and temperatures as low as -45 degrees.

“We can of course go out on to the ice surrounding us for outings in our free time, perhaps play a little football and such,” said Prof Rex, on German radio. “We won’t celebrate Christmas or birthdays together . . . but they understand why we are doing it. My sons, 9 and 11, are really big fans of this expedition so that makes things a bit easier.”