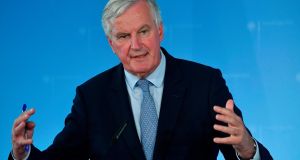 The EU’s chief Brexit negotiator said on Monday it was difficult to see a way to break the Brexit impasse as British prime minister Boris Johnson’s demand to drop an insurance policy for the Irish Border was unacceptable.

More than three years after the UK voted by 52 per cent to 48 per cent to leave the EU in a referendum, the future of Brexit remains uncertain, with options ranging from a turbulent no-deal exit to abandoning the entire endeavour.

Hopes of a deal to ease the exit were stoked when Mr Johnson said the shape of an accord was emerging and European Commission president Jean-Claude Juncker said an agreement was possible.

But EU negotiator Michel Barnier has cast doubt on the likelihood of a deal and reaffirmed that the bloc could not agree to London’s demand to remove from the existing withdrawal agreement the Irish backstop, a policy to prevent a return of Border controls on the island of Ireland – without a serious alternative.

“I am sure you understand this is unacceptable,” Mr Barnier said during a news conference in Berlin alongside German foreign minister Heiko Maas.

EU sources said no proper alternative arrangement for the Border between Northern Ireland and the Republic of Ireland that ensures the integrity of the EU single market and customs union has been proposed yet by London, so no breakthrough is on the cards.

In a quip about British talk of virtual checks on the Border, Mr Barnier said: “I don’t know how to inspect a cow with virtual methods.”

“Based on current UK thinking, it is difficult to see how we can arrive at a legally operative solution which fulfils all the objectives of the backstop. It is in a very sensitive and difficult phase,” he said.

Mr Johnson has vowed to take the UK out of the EU by the current deadline of October 31st, with or without a transition deal.

With the outcome of the marathon Brexit process still mired in doubt, the UK supreme court will rule on Tuesday whether Mr Johnson’s August 28th decision to suspend parliament was unlawful.

If the court’s 11 justices rule against the government at 10.30am BST on Tuesday, Mr Johnson could be forced to recall parliament – a step that widens the scope for politicians to block his “do-or-die” Brexit plans, which they fear could see the UK crashing out of the EU without a deal.

The opposition Labour Party will vote to decide its strategy on Monday, with leader Jeremy Corbyn heading for a showdown with the widely pro-EU party membership over whether Labour should endorse a policy of remaining in the bloc.

Ireland is crucial to any Brexit solution. Unless the Irish Border backstop is removed or amended, Mr Johnson will not be able to win parliamentary approval for a deal – but the Republic and the EU are loathe to sign a deal without a solution to the Border issue.

Mr Johnson has said he wants to secure an amended deal at an EU summit on October 17th-18th, and that “a large number of the important players”, including the UK, Germany, France and the Republic, are keen to reach an agreement.

But he says that means a removal of the backstop, which aims to avoid the reimposition of checks along what would be the sole UK land border with the EU by having London follow EU rules on trade, state aid, labour and environmental standards.

He said it was important that the UK “whole and entire” was able to break away from EU law in future.

“The problem with . . . the current backstop is that it would prevent the UK from diverging over a huge range of industrial standards and others,” he said. “We may want to regulate differently but clearly there is also a strong incentive to keep goods moving fluidly, and we think we can do both.”

An EU diplomat said on Monday that Mr Johnson’s government was sticking to a counterproductive approach imposing “its own, self-made problems on us and demand[ing] that we fix them”.

“. . .Why would we bend our rules for a country that is leaving? Why put ourselves at risk for a third country? Why help smooth their departure at our own cost?” the diplomat said. – Reuters