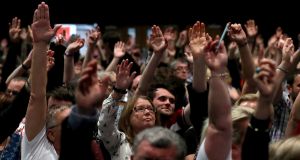 Jeremy Corbyn has seen off an attempt to commit Labour to campaign to remain in the European Union in a second referendum on Brexit. Delegates at the party’s annual conference in Brighton instead backed the leadership’s proposal to wait until after a general election to decide on Labour’s position.

The rejection of a motion backing an unequivocal Remain position came amid chaotic scenes in the conference hall when the chair refused to call a card vote after a show of hands that some delegates viewed as inconclusive. Wendy Nichols, who was chairing the proceedings, said she initially thought the motion was carried but she was overruled by general secretary Jennie Formby, a close ally of Mr Corbyn.

Despite calls from the floor to move to a card vote, Ms Nichols insisted that the decision was final and that the motion was defeated.

Monday’s votes mean that if Labour wins the next general election, it will seek to negotiate a new Brexit deal within three months and put that deal to a referendum within six months, with the other option being to remain in the EU.

Shadow Brexit secretary Keir Starmer told the conference that an incoming Labour government would legislate immediately for a referendum.

“We need to ask the public whether they are prepared to leave with the best deal that can be secured. Or whether they wouldn’t rather Remain in the EU. The people must have the final say. A referendum in which Remain should – and will – be on the ballot paper. Along with the best leave deal that can be secured. We owe it to those who want to leave to secure that leave deal and put it to them in a referendum,” he said.

Most of the trade unions affiliated to Labour, who control 50 per cent of votes at conference, backed the leadership’s position and opposed the motion calling for an unequivocal Remain position. Momentum, which supports Mr Corbyn but is pro-Remain, on Monday called on its delegates to back the leadership and reject the pro-Remain motion.

Liberal Democrat leader Jo Swinson, whose party wants to cancel Brexit by revoking Britain’s article 50 notification to withdraw from the EU, said Monday’s vote showed that Mr Corbyn was a Brexiteer at heart.

“Jeremy Corbyn has again shown a total lack of leadership on Brexit and settled on yet another fudge on the biggest issue facing our country. Jeremy Corbyn has repeatedly had the opportunity to put the full force of the Labour behind a Remain position, but he has once again shown today that he is a Brexiteer at heart,” she said.

“He is determined to negotiate a Brexit deal if Labour win an election, despite all the evidence that there is no Brexit deal that is good for our economy, our NHS and our security.”