Iran rules out talks with US, while Mike Pence says America is ‘locked and loaded’ 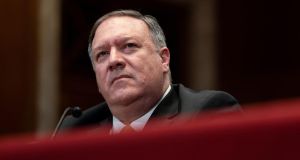 US secretary of state Mike Pompeo departed Washington on Tuesday night for Saudi Arabia in the wake of weekend attacks on oil facilities that have escalated tensions in the region.

Mr Pompeo is scheduled to arrive in Jeddah on Wednesday, where he will meet crown prince Mohammed bin Salman, before travelling to the United Arab Emirates.

The Yemeni Houthi group has claimed responsibility for Saturday morning’s attacks on key Saudi oil infrastructure, but Mr Pompeo has blamed Iran, which is a backer of the rebel group. The US is still mulling its response to the attacks, which crippled the kingdom’s oil supplies.

But Iran on Tuesday ruled out negotiations with the United States. Supreme leader Ayatollah Ali Khamenei posted on Twitter that “no negotiation will take place between the officials of the Islamic Republic and the US at any level, whether in New York or anywhere else”, a reference to next week’s meeting of the United Nations General Assembly in New York.

According to remarks published on his official website, the ayatollah also said that if the US “backs off and repents” and implements the 2015 nuclear deal, then it could re-enter discussions with Iran and European signatories to the deal.

“I’m not looking to meet him. I don’t think they’re ready yet. But they’ll be ready,” he said aboard Air Force One on his way to campaign events in California. “At the right time, they’ll be ready. I never rule anything out, but I prefer not meeting him.”

As the possibility of a face-to-face meeting receded, vice-president Mike Pence said the United States was “evaluating all the evidence” and “consulting with our allies” to determine the next course of action. In remarks to the conservative Heritage Foundation in Washington on Tuesday he said that the United States did not war but it was prepared. “We’re locked and loaded. And we’re ready to defend our interests and our allies in the region. Make no mistake about it.”

He also pledged to defend the interest of allies in the Middle East. “If Iran conducted this latest attack to pressure President Trump to back off, they failed. America is ready to defend our interests.”

American investigators are said to be examining evidence to determine precisely where Saturday’s attack originated. A report by the Pentagon is expected imminently.

The New York Times reported that American military investigators were in Saudi Arabia assessing parts that were recovered from the site.

While production has resumed at one of the facilities, it may be November before Saudi Arabia’s full production capacity is restored, the kingdom’s energy minister said on Tuesday.

In a Twitter post on Tuesday, Iran’s foreign minister, Mohammad Javad Zarif – a key figure in the negotiation of the 2015 nuclear deal – said Iran should not be blamed for the attack.

“US is in denial if it thinks that Yemeni victims of 4.5 yrs of the worst war crimes wouldn’t do all to strike back. Perhaps it’s embarrassed that $100s of bns of its arms didn’t intercept Yemeni fire. But blaming Iran won’t change that.”