‘This can only be fantasy’ – Greta Thunberg in New York, responding to global action

Over 10,000 people turned out for the climate strike protest in Dublin and millions of people took to the streets across the world in what could be the largest climate protest in history. 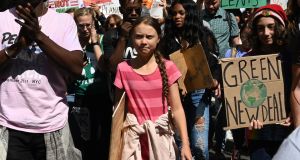 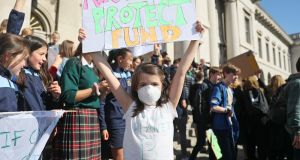 Protesters from Scoil Mhuire School at a rally organised by the Stop Climate Chaos Coalition in Dublin, Ireland on Friday. Photograph: PA 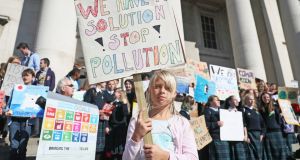 Protesters outside the Custom House in Dublin on Friday where the Department of Communications, Climate Action and Environment is based. Photograph: Brian Lawless/PA Wiree 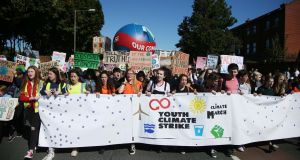 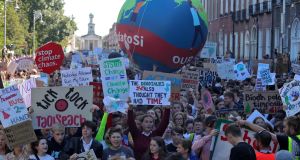 Some of the thousands of children who protested on Merrion Square in Dublin on Friday as part of the Global Climate Strike. Photograph: Collins 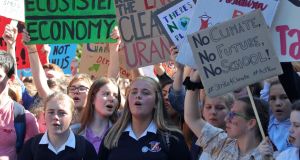 Children protest on Merrion Square in Dublin on Friday as part of the Global Climate Strike. Photograph: Collins

Millions of students and protesters took to the streets across the world on Friday, including thousands in Ireland, to demand urgent action from political leaders to tackle climate change.

The international day of action on Friday saw hundreds of Irish schools allow walk-outs as students missed lessons to march across Dublin, Limerick, Cork and Galway city centres, as well as local communities like Enniscorthy and Maynooth, demanding further action on tackling the climate emergency.

In Dublin, more than 10,000 children and young people gathered in the city’s Custom House Quay, and many held signs criticising the current Government and their environmental policy, such as “I’ve seen smarter cabinets in Ikea” and “Save the sea Michael D”. There were others saying “There is no planet B”, “The dinosaurs also thought they had time”, and “I want a hot boyfriend, not a hot earth”.

The crowds chanted for about an hour, calling out: “climate justice now” while they were shepherded by stewards, parents and teachers in the sunshine to a rally in Merrion Square where they were addressed by a number of young speakers about the effects of global warming.

One young protester, Rory Rusnak (14) from Sutton Park School, attended the march with his younger sister, and held a sign saying “Tick tock Taoiseach”, saying he felt he needed to send a direct message to Leo Varadkar.

“I think it’s important Leo Varadkar act on climate change, we young people are going to inherit the earth and it’s being destroyed right now for profit,” he said.

“The Government needs to do much more, I’d like them bring through real legislation and listen to young people about things like offshore drilling, which is a disaster for the climate and our marine life.”

One mother who joined the protest, Christine McGee, said she was inspired by her children to become a climate activist. “The students are telling us we have to act now,” she said.

“Leo has to be bold, stop the fossil fuels. I consider myself a climate activist now, after listening to my children, who are 16, 22 and 25. I was inspired by them.”

“Greta Thunberg (the Swedish teenager who sparked a global movement with climate activism), is teaching us all the way, I think she is the best.”

The rallies were part of the Global Climate Strike by student-led groups Fridays for Future Ireland and the Schools Climate Action Network - more than 4,000 registered events took place worldwide.

Stop Climate Chaos, a coalition of Irish organisations, alongside trade unions and grassroots groups, have mobilised communities to host actions in their towns and villages across the country.

Ireland was the second country in the world to declare a climate emergency, but the Government has been criticised for its policies on the environment since.

The decision by Blackrock College to bar students from attending climate change protests had been criticised, but there was little sign than many of them ignored the instruction.

Fourth year student Michael White (16) said there had been a mixed reaction among students to the letter sent to parents by the principal, Alan McGinty, who urged them not to take part in the strike.

“I think with the at times negative stereotypes surrounding Blackrock, it’s not a very good look that we’re here not going to the climate strikes today, and it’s a shame really,” he said.

Blackrock College was represented at the protests by its Green-Schools committee, but others went, too, said fifth year student, Max Reid: “I’d say if he didn’t put out the letter even less would have gone to it. Some people went just because he told them not to go.”

Several thousand students gathered in Cork on Friday morning for the global climate change protest with one eager group of teenagers having travelled from Ballyduff, Co Waterford to show their solidarity for the cause.

Protesters in Cork held banners and placards bearing messages such as “The Emperor has No Clothes,” “No Planet B” and “System Change not Climate Change.”

Sixth-year student Rachel Kingston and her friends Saidbh Corcoran, Freya Farrar and Fiadh Daly travelled to the city to register their protest at what they perceive as the failure of the Government to take strong action on the environment.

Rachel said some students still do not know a lot about the climate change crisis.

“We are from Waterford and most people in our school wouldn’t know about it. It is important to raise awareness. We came here with my mum. It is shocking that there are people who don’t know what is going on. Or people who are saying ‘who is Greta Thunberg?’ and you think ‘how do people not know that’?”

“When we look back on this day we are not going to be thinking about missing a day of school. We are going to thinking that we turned up for a great cause.”

Meanwhile, transition year student Juliusz Milewski from Clonakilty Community School in Co Cork said it was important for students to do more than pay lip service to the cause.

“It is looking like the numbers will be big today because it is an international event. The numbers increase every single time. Students themselves need to do things. Some people just eat bags of crisps and don’t even put the bags in the (recycling) bin.

“I would suspect that some people came here today as a doss. I think the more we have these protests the more people will increase their awareness. That said most of my generation are conscious of the environment.”

Internationally, millions of students, office workers and other protesters took to the streets around the world on Friday to demand global leaders gathering for a UN climate summit take urgent action to avert an environmental catastrophe.

The global climate strike kicked off in the Pacific islands - some of the nations most threatened by rising sea levels - and followed the rising sun through Australia, Japan, Southeast Asia and into Europe, Africa and the Middle East. Social media posts showed scores of demonstrations, ranging from a few dozen primary school children in Abuja, Nigeria, to tens of thousands of people in cities from Hamburg, in Germany, to Melbourne, Australia.

Greta Thunberg, the 16-year-old Swedish activist who has inspired the movement, noted in a tweet the “huge crowd” in Sydney, which she said would set the standard for strikes and protests planned in about 150 countries.

“Our future on your shoulders,” read one banner stretched across a street by students in Berlin.

“Our oceans are rising, so are we,” was a popular slogan on placards.

New York hosted one of the largest of Friday’s climate action rallies with well in excess of 100,000 people marching through Lower Manhattan demanding greater efforts to protect the environment. Greta Thunberg was in their midst.

The crowds were so big that the New York Police Department had to shut down many adjoining streets in Lower Manhattan including the exit from Brooklyn Bridge. An hour after the first rally began, protesters were still streaming out of the subways; many armed with their home-made placards.

“This can only be fantasy,” Thunberg declared in response to the latest manifestation of a global environmental movement that started out with just her and is now made of up of millions, who are mainly her peers.

Danielle Porepilliasana, a Sydney high school student, had a blunt message for politicians such as Australian finance minister Mathias Cormann, who told parliament on Thursday that students should stay in class. “World leaders from everywhere are telling us that students need to be at school doing work,” she said, wearing anti-coal earrings.

“I’d like to see them at their parliaments doing their jobs for once.”

The UN summit next week brings together world leaders to discuss climate change mitigation strategies, such as transitioning to renewable energy sources from fossil fuels.

The issue is vital to low-lying Pacific islands, which have repeatedly asked wealthier nations to do more to prevent rising sea levels.

The protest movement is putting increasing pressure on both governments and companies to respond. Online retail giant Amazon pledged on Thursday it would be net carbon neutral by 2040.

Cutting emissions is a challenging goal for Amazon, which delivers 10 billion items a year and has a massive transport and data centre footprint. “

Carbon emissions climbed to a record high last year, despite a warning from the UN-backed Intergovernmental Panel on Climate Change in October that output of the gases must be slashed over the next 12 years to stabilise the climate.

Organisers said demonstrations would take different forms around the world, but all aim to promote awareness of climate change and demand political action to curb contributing factors. - AP/Reuters/PA