Nigerian children targeted by both Boko Haram and army 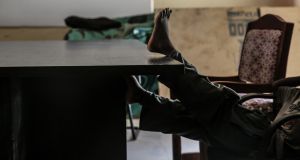 A Nigerian boy in a transit centre in Maiduguri, northeast Nigeria, shortly after he was released from military detention in 2017. His father remains locked up in Giwa Barracks. Photograph: Sally Hayden

Children are being doubly victimised in northeast Nigeria’s decade-long insurgency, according to a rights group, as they’re vulnerable to abduction by factions of Islamic militant group Boko Haram, and also likely to be locked up afterwards by the Nigerian military.

The United Nations says more than 3,600 children, including 1,617 girls, were detained between January 2013 and March 2019 under suspicion of being involved with non-state armed groups. Tens of thousands of children are believed to have been kidnapped by militants during this time.

Anietie Ewang, the Nigeria researcher for US-based Human Rights Watch, told The Irish Times she recently interviewed 32 children who had spent time in Giwa Barracks, an infamous prison near Maiduguri, in Borno State. They were all held for suspected Boko Haram involvement and the youngest was just 10 years old.

Some described being beaten by soldiers after they were arrested or during interrogations.

“We found that many children were detained after attacks on their village by Boko Haram. When they fled with members of their community to seek safety, the Nigerian security services arrested them as suspected Boko Haram members,” she said.

“Many of them spoke about the suffering in detention, the conditions that they described were appalling. When they spoke to us you could see it was very difficult for them to remember their time in military detention. Children described severe overcrowding with about 200-300 detainees in a small cell. They said there was so little room for them at night to sleep they had to sleep on their sides,” Ms Ewang said.

One child interviewee described being crammed into a cell like “razorblades in a pack”.

Nearly half of those who spoke to Human Rights Watch said they had seen the bodies of other detainees who had succumbed to illness at Giwa Barracks.

“Now they’re struggling to go back to school, to start businesses and have a source of income. They complain there is no support for them from the government,” Ms Ewang said. Some are stigmatised afterwards and called “Boko Haram wives” by others in camps for displaced people.

“There’s no legal process as far as we know. None of the children were ever brought before any sort of judicial process.”

The researcher said abductions are still continuing, though on a smaller scale than previous years, and that there’s “no real way of knowing” the total number of children that have been abducted during the conflict.

“The truth is in conflicts like this vulnerable groups suffer the most impact, and in this case we’re seeing children doubly victimised by Boko Haram and then the Nigerian army through these detentions. Children should be treated as victims and not perpetrators, regardless of the context in which they’ve been apprehended.”

1 All students will not return to school even if social distancing rules are relaxed – McHugh
2 Brazilian gang held in Offaly had sub-machine gun and student visas
3 Coronavirus: Further 9 deaths reported along with 46 new cases
4 Miriam Lord: Taoiseach is trapped in a Zoom session from hell
5 Emily Maitlis thanks BBC viewers for support after Cummings row
Real news has value SUBSCRIBE