3,000 people have died so far this year on the sea voyage from north Africa to Europe, in overloaded boats run by ruthless traffickers. We report from Sicily on the people at the centre of this mass migration

It’s 8am on September 23rd, and it’s already hot on the long pier of Porto Empedocle, a coastal town in southern Sicily. Waiting at the far end of the pier, lined up in convoy, are six coaches. One has a large placard on its dashboard that says “Turismo”, but these buses are not waiting for tourists. They are waiting for 290 migrants from Syria, Bangladesh, Nigeria and Mali who were rescued at sea the previous day from two boats 30km off the coast of Libya. They include six pregnant women and at least 40 children.

The first sight of the ship that slides slowly into view is both eerie and moving. Standing and sitting on its flat red surface – designed for inanimate cargo – are hundreds of men, women and children. Only hours before, they were risking their lives at sea in overloaded, unseaworthy boats that few people would ever willingly voyage in. As this Dutch cargo ship, the Groningen-registered Dinteldijk, gets closer, what is most striking is the silence. Nobody shouts. Nobody calls out. From the 290 migrants, who have been rescued from possible death and brought to the frontiers of another life, all that can be heard is the distinctive wail of a baby crying.

For almost a year five Italian naval ships have been searching around the clock for migrant boats, with the help of their coastguards. This operation, which is costing ¤9 million a month, is known as Mare Nostrum, or Our Sea. A white coastguard boat docks first. It has been accompanying the Dinteldijk. Under maritime law, ships at sea that spot boats in need of rescue are obliged to go to their aid. The previous day, Italian coastguards had instructed the crew of seven on the Dinteldijk to rescue two boatloads of migrants they had come across by chance. The Dinteldijk’s passengers display a range of expressions: relief, trepidation, stoicism. All look exhausted. There is no one type of migrant.

An academic-looking man with glasses who set out to risk his life at sea 48 hours previously decided to do so attired in shirt, tie and jacket. Another man carries a black laptop case.

Migrants of the Mediterranean: ‘Lesbians are not approved of in Nigeria’

Child migrants of the Mediterranean pay a high price

Journeys of death: boat people of the southern Mediterranean

Italy’s response: rescue the migrants, then turn a blind eye

Where they come from: the African migrants of the Med

Where they come from: The Middle Eastern migrants of the Med 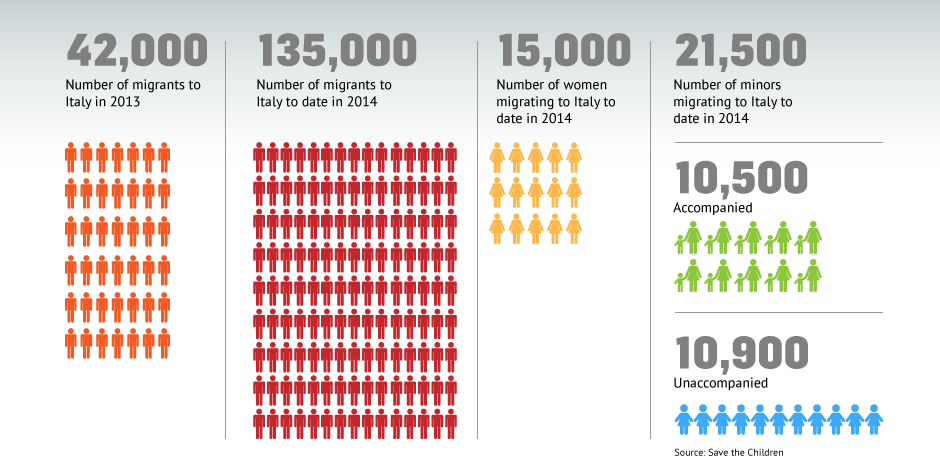 More than 3,000 migrants have died in the Mediterranean this year, a ccording to the International Organisation for Migration, the vast majority en route to Italy and Greece. 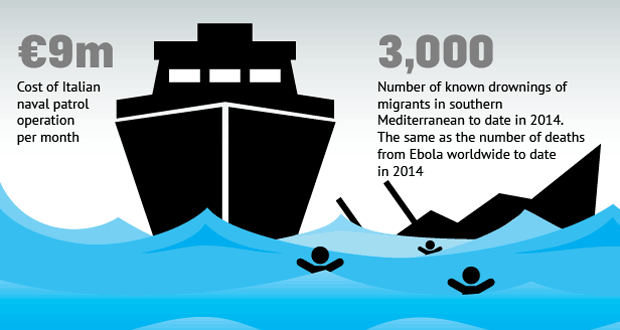 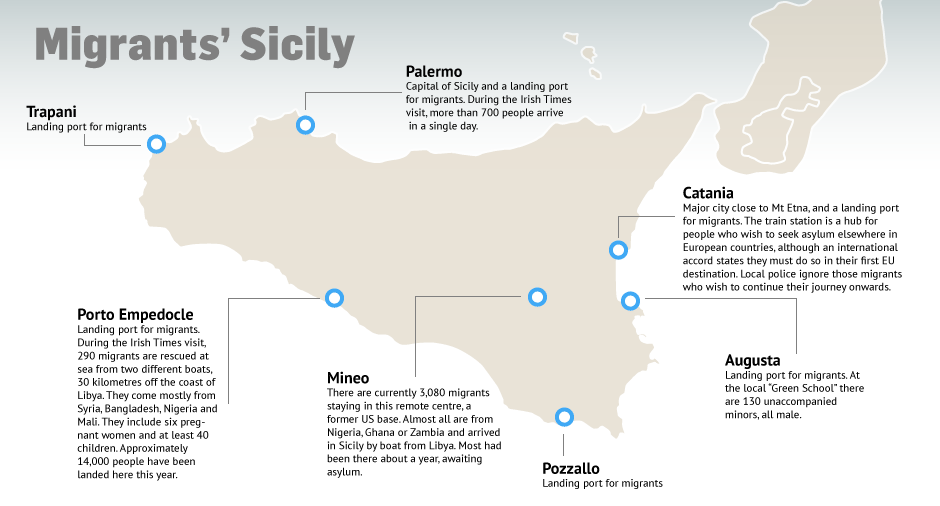 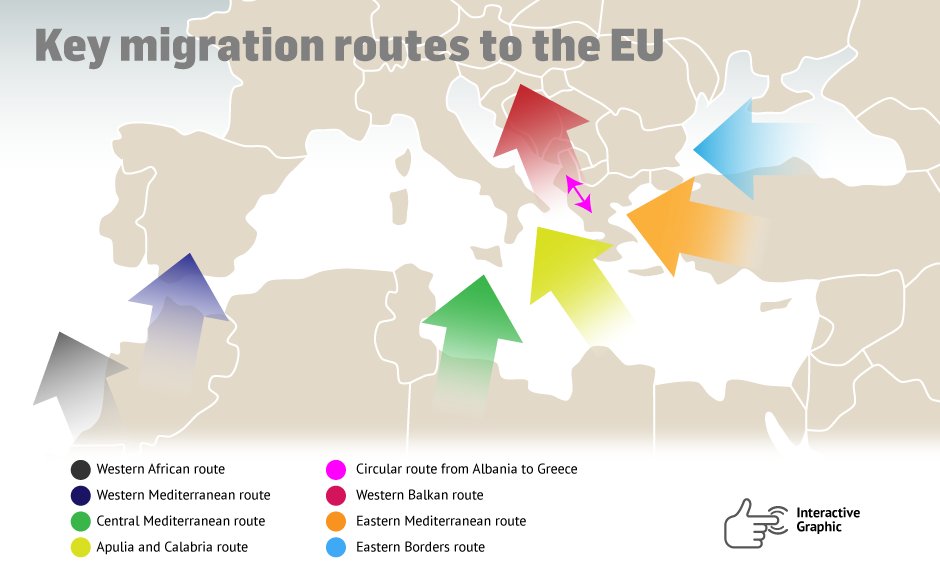 Where the migrants come from

A ccording to the United Nations High Commissioner for Refugees, Syria is the homeland of by far the largest number of migrants seeking asylum in industrialised countries. During the first half of 2014, 48,400 Syrians applied, followed by Iraq (21,300) and Afghanistan (19,300).

Nearly half of Syria’s 23 million people have been displaced within Syria or fled the country, while the IOM gives the net migration rate for Libya as 7.7 per thousand in a population of 6.2 million. Libyans rank low on the asylum seekers table although Libya is the main transit country for African migration to Europe.

The African migrants trying to reach the shores of Sicily in recent months are primarily from six countries across the continent, five of which are riven by conflict or are ruled by oppressive regimes. Eritrea, Somalia, Mali, Nigeria, Ghana and Gambia are the countries of origin of the majority of Africans willing to risk their lives by crossing the Mediterranean from north Africa in ramshackle boats to reach Europe.

Of these six nations, Eritrea is home to the highest number of African refugees trying to get to Sicily. There are more than 300,000 Eritrean asylum seekers worldwide and there is “little sign they want to return to their homes”, according to United Nations High Commissioner for Refugees spokeswoman Karin de Gruijl.

The UN’s statistics show there are 1.1 million Somali, 143,000 Malian and 66,000 Nigerian refugees worldwide. All three countries have internal armed conflicts in which government forces are pitted against Islamic extremist groups.

The recently elected Somali government has been involved in a protracted fight against terrorist group Al-Shaabab, but instability involving inter-clan warfare stretches back to the early 1990s. In landlocked Mali in west Africa the majority of refugees come from the country’s north, where the democratically elected government has been fighting a Tuareg insurgency since 2007. This has been exacerbated by the eruption of the Libyan conflict in 2011 and the subsequent proliferation of weapons across the region.

Refugees from Nigeria – the continent’s largest economy – come primarily from the north where they are fleeing the activities of militant Islamist group Boko Haram, which has conducted waves of bombings, assassinations and kidnappings as part of its efforts to establish an Islamic state within Nigeria’s borders.

While Ghana is seen as one of Africa’s most progressive countries both economically and politically, de Gruijl says there are officially 21,000 refugees from the country linked to unrest in the northern territory. Between 1994 and 1995 land disputes in the north erupted into ethnic violence, leaving an estimated 1,000 people dead and a further 150,000 displaced. However, thousands of Ghanaians were working in Libya when the civil war broke out there.