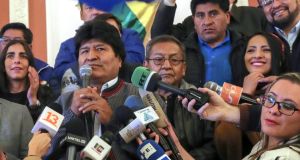 President of Bolivia Evo Morales: cult of personalty has developed around him after almost 14 years in power. Photograph: Martin Alipaz

The contentious bid by Bolivia’s president Evo Morales to win a fourth consecutive term in office looks set to head for a run-off round after he failed to win an outright victory in Sunday’s election.

But the count was plunged into controversy on Sunday night after Bolivia’s electoral court, which oversees the poll, suspended its updating of results just as it became almost inevitable that Mr Morales would fall short of a first-round victory.

With about 84 per cent of votes counted, Mr Morales had 46 per cent of the vote with former president Carlos Mesa in second place with 38 per cent. If the result is confirmed the two men will face each other again in December. It is the first time since becoming president in 2006 that Mr Morales would fail to win an outright majority on the first round.

His Movement Towards Socialism party, or Mas after its initials in Spanish, is also set to lose its two-thirds super-majority in congress. No party will exercise overall control, presenting the eventual winner of the presidential contest with an immediate political headache.

After the electoral court suspended its updates, an observer mission from the Organisation of American States demanded it explain the interruption while Mr Mesa said on Monday that the move was a clear attempt to deny voters a second round. He accused the court of being “a simple operational instrument of Mr Evo Morales which is a shame in this electoral process”. He called on supporters to rally at count centres in order to prevent a new “21-F”.

He was referring to the 2016 referendum which rejected a demand by Mr Morales to be allowed to run for a fourth consecutive term. He refused to accept the result and had the country’s constitutional court, dominated by Mas picks, set it aside by ruling term limits violated the president’s human rights.

The move led to accusations that Mr Morales, around whom a cult of personalty has developed, was becoming increasingly authoritarian after almost 14 years in power. For most of that time, he has enjoyed widespread popular support thanks to his government overseeing steady economic expansion, declining inequality and the empowerment of the country’s long-humiliated indigenous majority.

But since the referendum controversy, which provoked anger even in regions long dominated by Mas, Mr Morales has suffered a decline in his popularity. His administration has also been buffeted by a string of corruption scandals involving senior officials and its slow response to recent wildfires that opponents said were the result of the complacency and incompetence that riddles government.

In Mr Mesa the fractured opposition has finally found a figure with the political stature to take on Mr Morales even if he has failed to heal the divisions that have long prevented the emergence of a genuine challenger to the domination of Mas. A well-known historian, he served as president for 17 months after his predecessor was forced to flee the country following a popular uprising.