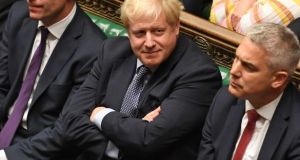 British prime minister Boris Johnson is seeking to fast-track legislation to ratify his Brexit deal through the House of Commons in three days as he attempts to avoid another delay to Britain’s departure from the EU.

Leader of the House Jacob Rees-Mogg told MPs debate on the Withdrawal Agreement Bill would start on Tuesday with ministers hoping to get it through all its Commons stages by Thursday.

If they are successful it could pave the way for House of Lords to sit over the weekend in time for the Bill to receive its royal assent at the start of next week.

However, they are likely to face opposition attempts to amend the legislation including the “programme motion” setting out the Commons timetable for the Bill.

The Bill runs to 110 pages and is accompanied by 124 pages of explanatory notes.

Some MPs have complained that the Government’s timetable, which aims to complete its Commons passage on Thursday, means there will not be time for proper scrutiny.

Earlier on Monday, House of Commons speaker John Bercow ruled out a new “meaningful vote” on UK prime minister Boris Johnson’s Brexit deal.Mr Johnson is also facing a court challenge over his extension request and Labour attempts to secure a customs union and a fresh referendum.

In his latest House of Commons defeat, Mr Johnson abandoned plans for a meaningful vote on Saturday when MPs backed a move forcing him to ask Brussels for a further delay.

Mr Bercow told the Commons: “It’s clear that the motions are in substance the same.

“However, this matter was decided fewer than 49 hours ago. After more than three hours of debate the House voted by 322 to 306 for Sir Oliver Letwin’s amendment, which stated that ‘this House has considered the matter but withholds approval unless and until implementing legislation is passed’.”

“Today’s motion is in substance the same as Saturday’s motion, and the House has decided the matter.

Mr Bercow said the “same question convention” is “a necessary rule to ensure the sensible use of the House’s time, and proper respect for the decisions that it takes”.

Mr Bercow went on to say that the UK government can legitimately introduce its EU Withdrawal and Implementation Bill. He said the Bill has been presented for its first reading today.

Mr Bercow added: “I have no doubt that the leader will offer further details of the intended timetable for the Bill when he makes a business statement later today.”

Downing Street said it would pull Monday’s vote if any amendments are selected which would “render the vote pointless”.

“There is no point having a meaningless vote – the government would pull the motion. We will go ahead with the introduction of the [Withdrawal Agreement Bill] with second reading tomorrow,” the prime minister’s official spokesman said.

“The public want Brexit done – the government is determined to pass the PM’s great new deal and get us out of the EU on October 31st.”

Chief secretary to the treasury Rishi Sunak earlier denied that trying to bring the deal back for a vote was a bid to portray British parliament as being obstructive.

“It was an observation on the deal happening and I think what people need is a substantive vote,” he told BBC Radio 4’s Today programme.

“I think people are crying out to see that and they would find it odd if, because of some technical procedural device, we weren’t able to have that vote.”

If the speaker does block the move, focus will switch to the British government bringing its Withdrawal Agreement Bill before MPs on Monday, with a vote on its second reading on Tuesday.

The Bill is the legally-binding treaty that must be passed for the UK to leave the bloc, while the government must also win a meaningful vote.

Brexit secretary Stephen Barclay called on MPs to “respect the referendum” by backing the Bill, warning them: “This is the chance to leave the EU with a deal on October 31.”

Ministers insist they could have sufficient support among MPs to get it passed so the UK can depart by the current October 31st deadline.

But, with no Commons majority, Mr Johnson faces a major battle to achieve his cast-iron pledge.

Labour has denied it is trying to scupper the prime minister’s agreement by planning to amend it to secure a customs union and a second referendum as the legislation passes through parliament.

“We believe that the responsible way in which to leave the European Union is in a customs union arrangement and that, in turn, should be put to the British people so they can have a say on this.”

Meanwhile, judges are set to decide whether the unsigned letter sent by the prime minister asking for a Brexit extension from the EU complied with the Benn Act, or if he is in contempt of court.

Mr Johnson was forced to send the letter under the law passed by MPs trying to fend off a no-deal Brexit because MPs did not support his deal by the Saturday deadline.

But he signed a second letter and said a delay would be a mistake and judges at the Court of Session in Edinburgh are to resume a hearing on Monday.

The letters were sent after former Tory minister Sir Oliver Letwin handed Mr Johnson an embarrassing defeat in the Commons.

Sir Oliver, who was among the rebels exiled by Mr Johnson over their attempts to stop a no-deal, successfully tabled an amendment which effectively forced the prime minister to ask for a delay.

As parliament demanded in the Benn Act, Mr Johnson wrote to European Council president Donald Tusk requesting an extension to the end of January.

Mr Johnson did not sign the letter, and sent a second communication insisting that a delay would be “deeply corrosive” for the UK and the EU.

Labour accused Mr Johnson of behaving like a “spoiled brat”.

She said the ratification process has been launched on the EU side, with Michel Barnier having already debriefed EU ambassadors ahead of debriefing the European Parliament Brexit steering group on Monday afternoon in Strasbourg.– PA