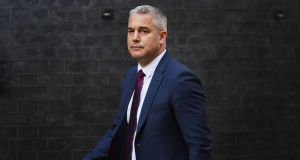 Secretary of state for exiting the European Union Steve Barclay: said goods shipped from Northern Ireland to Great Britain would have to be accompanied by an “exit summary declaration” under EU customs rules. Photograph: Chris J Ratcliffe/Getty

The DUP has accused the British government of breaking its promise to maintain unfettered access after Brexit for Northern Ireland to the British market after it emerged that northern businesses will have to complete declarations for goods they send to Great Britain.

Brexit secretary Steve Barclay told a House of Lords committee that goods shipped from Northern Ireland to Great Britain would have to be accompanied by an “exit summary declaration” under EU customs rules.

“What I was referring to was in line with international obligations, some practical information will be needed to be provided electronically on movement of goods from west to east, however the government will be considering the process during the implementation period,” he said.

DUP Brexit spokesman Sammy Wilson said it was a clear breach of the British government’s commitment to allow unfettered access to the British market for Northern Ireland businesses.

“How can any Conservative and unionist MP argue this does not represent a border in the Irish Sea?” he said.

During heated exchanges in the House of Commons with Northern Ireland secretary Julian Smith, DUP MPs accused the government of double standards in requiring cross-community support for restoring the Stormont institutions but only a simple majority in the Assembly to continue the post-Brexit arrangements after four years.

“I cannot emphasise enough to the secretary of state how important the principle of consent is to unionists. The idea that a decision of the momentous nature of the one we will be expected to take in four years’ time does not reflect adequately the principle of consent, as expressed in the Belfast Agreement, has serious implications for our ability to support the restoration of devolution without that safeguard. I say with all seriousness to the secretary of state that if this issue is not addressed, it goes well beyond this Brexit deal,” the party’s chief whip Jeffrey Donaldson said.

Mr Smith said the Brexit deal was part of an international treaty and as such a matter for which Westminster rather than Stormont was responsible. He said it had no impact on the petition of concern mechanism at Stormont but said the government would try to offer reassurances to unionists as the withdrawal agreement Bill passes through Parliament this week.

“But remember that the issue with the backstop was a lack of consent. This consent mechanism is intended to deal with that, but it has no effect on the Northern Ireland Assembly, ” he said.

Boris Johnson spoke by phone to European Parliament president David Sassoli, urging him to help to complete ratification of the Brexit deal by October 31st. The European Parliament is sitting in Strasbourg this week but its next scheduled session is not until the middle of November.