Country’s president describes rioters as ‘evil’, saying ‘we are at war’ in TV broadcast

Several people were killed after a supermarket in the Chilean capital Santiago was set alight by demonstrators. Unrest in the city was sparked initially by a now suspended metro fare hike. Video: Reuters 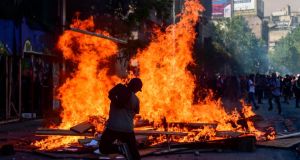 Demonstrators burn a barricade during a protest in Santiago, Chile on Monday. Photograph: Martin Bernetti/AFP/Getty

Thousands of protesters gathered in Chilean cities on Monday after a weekend of deadly clashes with soldiers and police that left 11 dead.

Chile is enduring a fourth day of rioting in the worst unrest since the country returned to democracy in the late 1980s to become Latin America’s most prosperous nation.

About 1,500 people have been arrested in a wave of arson and riots that have brought cities to a near standstill and seen security forces fire on masked looters. President Sebastian Pinera declared a state of emergency Friday and called on the army to restore order.

What began as protests against subway-fare increases quickly morphed into outpourings of discontent over income equality, pensions, health and education.

While Mr Pinera back-pedaled on the fare increase, his efforts to crack down on violence have merely intensified it. Late Sunday, he had a stark message for Chile: We are at war, choose sides and we will win.

“We are at war against a powerful, relentless enemy, who doesn’t respect anyone, who is willing to use violence without any limits, even if it means the loss of human life,” Mr Pinera said in a televised speech. The rioters “represent evil.”

Hundreds of protesters started to fill Santiago’s Italia square at around midday Monday. Most were university students banging pots and wearing scarfs over their mouths and noses. They chanted for the military to leave the streets and carried banners calling for Pinera to resign.

Armoured vehicles sprayed tear gas to disperse demonstrators, and officers occasionally fired at the crowd. The people set burning barricades across nearby streets and some threw stones at police and army vehicles as they raced by.

The 11 deaths were caused by arson attacks at a supermarket and a warehouse. About 70 subway stations have been damaged, some almost destroyed, dozens of buses have been burned, shops looted and buildings set alight.

A curfew has failed to prevent the chaos, which spread to other regions.

At least 22 people were severely wounded during the protests, Chile’s National Human Rights Institute said on Sunday, according to Chilean daily El Mostrador.

The organization said there were reports of excessive force and sexual harassment by security forces, with women forced to take off their clothes, El Mostrador reported.

On Monday, most shops were shut and many companies encouraged employees to work from home. Those who did go to work, after the curfew lifted at 6 am, faced restricted public transport, with soldiers guarding subway entrances and military helicopters overhead. – Bloomberg