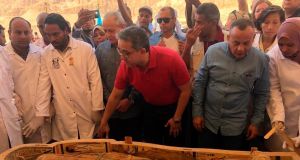 Egyptian minister of antiquities Khaled el-Anany (centre) with one of the 30 ancient wooden coffins discovered in a necropolis on the west bank of the Nile, near Luxor. Photograph: Egyptian Ministry of Antiquities/AP

Details of 30 ancient wooden coffins recently discovered in the Egyptian city of Luxor have been revealed by the country’s antiquities authority.

Mostafa Waziri, secretary-general of the Supreme Council of Antiquities, said the coffins, decorated with inscriptions and paintings, were found last week in the Asasif necropolis on the river Nile’s west bank near Luxor.

He said the coffins were for men, women and children from the 22nd dynasty (945-715 BC), and had been collected and hidden by a priest over fears of looting.

The coffins were in two layers, with the ones on top across those below.

Minister for antiquities Khaled el-Anany said the mummies found in the coffins include 23 adult males, five adult females and two children. He said the coffins were “exceptionally painted and preserved”.

Archaeologists opened the coffins of a man and a woman, both wrapped in cloth. Their gender can be distinguished by the shape of their hands, said Mr Waziri, who explained that ancient women were buried with their hands open while men’s hands were closed.

Mr El-Anany said further excavations are under way in the necropolis, which includes tombs dating back to the Middle, New Kingdom and Late periods (1994BC to 332BC).

He said the coffins will be moved in November to the Grand Egyptian Museum that Egypt is building near the famed Giza Pyramids in Cairo. –AP