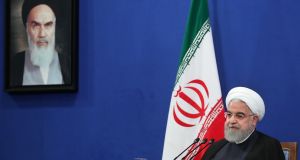 Three Iranians – one of them a presenter on a dissident TV channel – have been given police protection in the Netherlands in a move that could see a new flare-up of the diplomatic row between the Dutch and Iranian governments earlier this year.

In January, the Dutch accused Tehran of hiring the local criminals who assassinated two Iranian dissidents, one in 2015 and the other in 2017 – and the EU imposed sanctions on Iran for a campaign of killings and attempted killings in the Netherlands, Denmark and France.

The “introduction” of the Iranian security services to the Dutch gangsters is believed to have been facilitated by the Lebanese militant group, Hizbullah, which is known to have connections to the underworld in the Netherlands through the global drugs trade.

The accusations led to a tit-for-tat exchange between the Netherlands and Iran in which Tehran expelled two Dutch diplomats, the Dutch recalled their ambassador for consultation, and warned the Iranian ambassador that the behaviour of the Iranian intelligence ministry was ‘totally unacceptable”.

The first of those killed on Dutch soil was Ali Motamed, a 56-year-old electrician who was shot in the head at point-blank range outside the home he shared in Almere, near Amsterdam, with his wife, Galina (50), and 17-year-old son.

In the aftermath of the killing his real identity was established as Mohammed Reza Kolahi, sentenced to death in absentia for a bomb attack on the headquarters of the Islamic Republican Party in Tehran in 1981 which killed 73 people, including a deputy to Ayatollah Khomeini.

Two Amsterdam criminals were jailed last April for murdering Motamed for a fee of €130,000.

The second assassination was similar. This time the target was Ahmad Mola Nissi (52), who was also shot dead at his front door in The Hague. It later emerged he was a leader of a movement planning a breakaway state in western Iran and considered a terrorist by the Tehran government.

Although none of the three dissidents who have now been given police protection has been identified, one did appear in silhouette on an investigative TV programme last week in what appears to have been an attempt to head off any new assassination attempt by going public.

He said he already had a panic button connected to the local police station in his business premises. However, this was now being upgraded to 24-hour protection.

The other two dissidents to receive protection are believed to live in Maastricht, though nothing else is known publicly about them.

“Tehran routinely uses diplomatic missions, disaffected persons, terrorist groups such as Hizbullah, and criminals to engage in assassinations abroad while retaining a degree of plausible deniability”, says Behnam Ben Taleblu of the Foundation for the Defence of Democracies.