Riots continued across Barcelona following an evening of rioting over the jail sentences given to separatist politicians. Video: Reuters 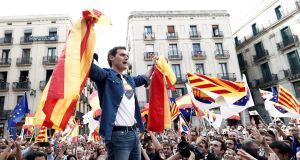 One of the most prominent figures against independence for the Spanish region of Catalonia staged a counter-protest in Barcelona on Sunday after a week of separatist unrest, and called for an end to the violence.

Albert Rivera, head of the pro-unionist Ciudadanos party, told hundreds of flag-waving supporters at the rally that Spain’s acting Socialist government was not doing enough to end the chaos sparked by the jailing of separatist leaders.

“People can’t take their children to school, they can’t open their businesses,” Barcelona-born Rivera said. “We need a Spanish government that protects the weak.”

Pro-independence supporters have taken to the streets of Barcelona for six days running in often violent confrontations with police that have left several hundred injured and caused €2.5 million worth of damage.

A policeman and a protester remain in a critical condition, Barcelona mayor Ada Colau said on Sunday, adding that “several people” had been blinded in one eye by police rubber bullets.

After unprecedented violence on Friday, demonstrations on Saturday passed off relatively peacefully and the government has said it has the situation under control.

“The riots are diminishing, but we are working on stopping them altogether,” said the acting interior minister, Fernando Grande-Marlaska, in his daily update on the situation.

He told reporters that 288 police officers had been hurt in the clashes, 267 police vehicles damaged and 194 people arrested.

Independence is a highly divisive issue in Catalonia, which is Spain’s wealthiest region and has 7.5 million inhabitants. A poll in July showed backing for secession at its lowest level in two years, with 48.3 per cent of people against and 44 per cent in favour.

“There are more of us Catalan Spaniards than separatists. It’s important that people see that not everyone is in favour of independence,” said Martina Gonzalez, a 58-year-old cleaner who had a Spanish flag draped over her shoulders.

One of those at the rally, 54-year-old Angel Rodriguez, said he had never witnessed the sort of urban unrest that has rocked Spain’s second largest city this week.

“These young people have been indoctrinated. They can’t explain why they want independence because they don’t know the history,” he said.

Mr Sánchez said Catalonia president Quim Torra must first condemn the tumult unequivocally and then build bridges with the many Catalans who do not want secession.

Pro-independence leaders in Catalonia staged an illegal referendum on secession in 2017 and then declared they were breaking away from Spain. The Spanish government of the time immediately seized control of the Catalan administration and the ringleaders were put on trial.

The supreme court on Monday found nine politicians and activists guilty of sedition and sentenced them to up to 13 years in jail, triggering immediate street unrest.– Reuters