Lebanon’s PM seeks to placate protesters with range of reforms

Demonstrations against mismanagement and corruption prompt action from Hariri 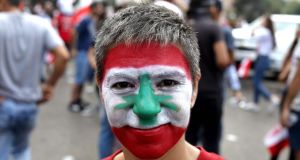 Lebanese woman with a national flag painted on her face taking part in a rally in Beirut on October 20th on the fourth day of demonstrations against tax increases and corruption. Photograph: Patrick Baz/AFP

Lebanon’s government approved an emergency package of reforms on Monday in response to five days of unprecedented mass protests against state mismanagement and corruption.

Protesters seek the removal of the entire political elite and an end to the sectarian system of governance bequeathed by colonial France.

“These decisions might not fulfil your demands but they fulfil what I’ve been calling for [for] two years,” he said. He pledged not to call out the security services to crush the protests.

Mr Hariri’s plan promises there will be no new taxes and provides for a 50 per cent cut in salaries of serving and former ministers and members of parliament, and $3.3 billion (€2.96 billion) in contributions to state coffers from banks with the aim of achieving a “near-zero” deficit in the 2020 budget.

He promised to overhaul the electricity infrastructure, privatise telecommunications and retrieve “looted state funds”, a major demand of the protesters. They insist the authorities should follow the example of Saudi crown prince Mohammed Bin Salman, who detained corrupt princes, officials and businessmen and secured billions of dollars in ill-gotten gains.

The government’s main aim is to convince international donors to free up $11 billion in grants and soft loans pledged for Lebanon last year. Lebanese will not be reassured, however, unless oversight and transparency mechanisms are put in place.

In their experience, disbursement of aid and privatisation involves graft and no improvements in the dire situation of the people.

Hizbullah member of parliament Ibrahim al-Moussawi agreed with Lebanese consulted by The Irish Times when he said the protesters had no leadership and no plan of their own. He warned that the collapse of the regime could cause a vacuum.

Hizbullah, he said, has supported Mr Hariri even though it fears his reform plan will not go far enough to assuage the anger of the people. The protests, Dr Moussawi stated, “are a blessing from God for us because [the uprising] could be an awakening [for the politicians] who have come under pressure from the people”.

Politicians, he said, were “divorced from the people”. He did not believe the protests could continue because participants had to return to work and banks and schools to open.

Whether accepted or not, the resignations of four ministers from the Lebanese Forces party led by Samir Geagea has undermined Mr Hariri’s position. The party is the third-largest in parliament and the largest in his bloc. He is already in a weak position as his main external sponsor, Saudi Arabia, has reduced its support, boosting the influence of Iran, which backs the bloc of president Michel Aoun, parliamentary speaker Nabih Berri and Hizbullah.

The traditional parties have played ministerial musical chairs for decades while their leaders have left no room for new political figures or parties to emerge. Consequently, Lebanese have no alternative but to bet on reform or to take to the streets again if the government does not deliver.

Although the country’s three most recent presidents have been army generals, Lebanese do not want a military government and believe they will see no change if fresh parliamentary elections are held without abolishing the system of sectarian powersharing and voting within faith communities.

Popular protests erupted last Thursday night after the government approved a $0.20 tax on messaging services, including WhatsApp, widely accessed by all levels of society. This tax was imposed under an austerity programme adopted in July which raised taxes on essential goods and services at a time youth unemployment ranges from 37 to 60 per cent, depending on location, and more than 20 per cent of the population lives below the poverty line.

Stand-off in Europe over plan to ban ski season due to Covid-19 17:41
Rights groups condemn move of trial of Saudi woman activist to ‘terrorism court’ 17:28
Hundreds jailed for life in Turkey for roles in 2016 coup plot 15:29
Xi Jinping congratulates Joe Biden on US election victory 10:39
Ethiopian forces to begin ‘final phase’ of offensive in Tigray 09:05