Spanish PM and Catalan leader at odds over recent riots 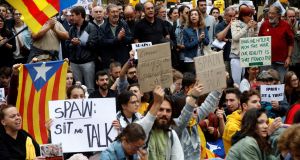 A sit-down protest outside Catalan government headquarters after a weekend of unrest. Photograph: Toni Albir

Relations between the Spanish and Catalan governments appear to have hit a new low in the wake of the tumultuous events in Barcelona last week.

The Spanish acting prime minister Pedro Sánchez has refused to meet the Catalan president, Quim Torra, who has called for negotiations in an attempt to find a political solution to the ongoing crisis.

The Spanish supreme court’s jailing of nine independence leaders last Monday for sedition triggered a wave of unrest on the streets of the Catalan capital and other cities, often descending into violent standoffs between police and hardcore protesters.

The two leaders have exchanged a series of strongly worded letters since the weekend, in which Mr Sánchez has ruled out talks with the Catalan president unless he changes his stance on the recent disturbances.

“You have avoided condemning in an explicit way the violent behaviour which has been so viciously and repeatedly visible in different parts of Catalonia, even near your own office,” the prime minister wrote. He also called on Mr Torra to start showing support for the regional security forces and to stop dividing Catalan society.

An appeal by Mr Torra last week for protesters not to use violence failed to satisfy the Spanish government, which said his comments had come late and were equivocal.

The prime minister was in Barcelona on Monday, where he congratulated police on their handling of the protests, as well as visiting police officers who were injured in the disturbances. Pro-independence Catalans jeered him as he arrived at the two hospitals where they were recovering.

Nearly 600 people received medical treatment for the disturbances between last Monday and Sunday, according to the Spanish interior ministry, almost half of them police officers. One policeman is still in a very serious condition, while three civilians have lost the sight in one eye, reportedly due to the police’s use of foam and plastic bullets.

A total of 194 people were arrested.

Mr Torra responded with a letter in which he warned Mr Sánchez that “The absence of dialogue, the imposition of silence and the repression of free speech merely serve to further divide society and deteriorate our ability to peacefully coexist.” The Catalan government also distributed a video showing Mr Torra’s bemusement as the prime minister’s office apparently refused to take a phone call from him.

Protests have been much calmer since Saturday, with volunteers placing themselves between police and violent activists in order to prevent night-time clashes. On Monday, demonstrations continued, with many protesters using the English-language slogan “Spain Sit and Talk” as they sought to exert pressure on Madrid.

However, in Madrid, parties on the right are lobbying for Mr Sánchez to go further than simply refusing to negotiate with the Catalan government.

“The only call that needs to be made to Torra is to tell him he has been removed from office,” said Albert Rivera, leader of the Ciudadanos party, who is calling on the prime minister to introduce direct rule in Catalonia.