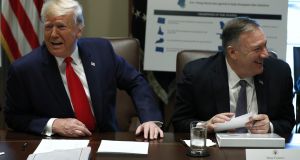 US president Donald Trump and Mike Pompeo, US secretary of state, during a Cabinet meeting at the White House, Monday. Photograph: Yuri Gripas/Abaca Press/Bloomberg

The US’s acting ambassador to Ukraine, Bill Taylor, is scheduled to testify before three House of Representatives committees on Tuesday, as the impeachment inquiry into President Donald Trump’s activities continues for its fourth week.

Mr Taylor has been an important figure in US efforts in recent months to encourage the Ukrainian government to clamp down on corruption. According to text messages released to the committees by the former special envoy to Ukraine, Kurt Volker, Mr Taylor raised concerns about what he suggested was a quid pro quo suggested by the Trump administration – the promise to give security aid to Ukraine if the country investigated former vice-president Joe Biden and allegations of foreign interference in the 2016 election.

“As I said on the phone, I think it’s crazy to withhold security assistance for help with a political campaign,” Mr Taylor wrote in a text message sent to the US’s EU ambassador Gordon Sondland and released by the committee. Mr Sondland replied that he believed Mr Taylor was “incorrect about President Trump’s intentions”.

A career diplomat, Mr Taylor was appointed charge d’affaires in Kiev following the departure of Marie Yovanovitch, a diplomat who was recalled by the Trump administration early in her tenure. She told the committees earlier this month that she believed Mr Trump’s personal lawyer Rudy Giuliani had helped orchestrate a campaign against her.

House Democrats are investigating the Trump administration’s dealings in Ukraine, and in particular a phone call between the US president and his Ukrainian counterpart during which he encouraged Volodymyr Zelensky to investigate Mr Biden and his son Hunter, who served on the board of a Ukrainian gas company while his father was vice-president.

Several state department and national security council officials are scheduled to testify before Congress this week as part of the impeachment inquiry, though funeral arrangements for congressman Elijah Cummings, who died unexpectedly last week, could delay some depositions.

Pressure has been building on acting White House chief of staff Mick Mulvaney following his assertion at a press conference last week that the administration withheld aid from Ukraine as a quid pro quo for the Ukrainian government investigating interference in the 2016 election.

Mr Mulvaney, Mr Trump’s third chief of staff, appeared alongside senior administration officials and the president at a televised cabinet meeting in the White House on Monday.

Mr Trump deflected questions about Mr Mulvaney’s future. But he spent much of the impromptu press conference defending his decision to originally choose his resort in Miami as the location for next year’s G7 summit, a decision he reversed following pushback from members of his own party.

“I would have given it for nothing,” he said, rejecting criticism that he may have been in breach of the emoluments clause in the constitution which bans presidents from profiting from the office. Noting the resort’s location close to Miami airport, he said that “everyone in the G7 would have had their own building”.

“The Democrats went crazy, even though I would have done it free, saved the country a lot of money,” he said. “Then they say, ‘Oh, but you’ll get promotion’. Who cares? You don’t think I get enough promotion? I get more promotion than any human being that’s ever lived.”

He also denounced the “phony” emoluments clause in the US constitution, adding that he estimates the presidency has cost him “anywhere from $2 billion to $5 billion”.

“Other presidents were wealthy. Not huge wealth. . . but they ran their businesses,” he said. “George Washington, they say, had two desks. He had a presidential desk and a business desk.” He also criticised his predecessor Barack Obama for signing a book deal.