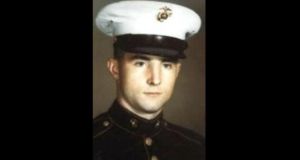 Cpl Patrick Gallagher from Derrintogher, Co Mayo, of the US Marines was shot dead while on patrol in Da Nang on March 30th, 1967.

The US navy is to name a ship after a young Mayo man Cpl Patrick (Bob) Gallagher who was killed in Vietnam in 1967, it was announced in New York on Monday.

US Senate minority leader Chuck Schumer announced that the US navy would name its next destroyer “in honour of USMC Corporal Patrick ‘Bob’ Gallagher” from near Ballyhaunis, Co Mayo. On July 18th, 1966, 23-year-old Cpl Gallagher saved the lives of three comrades in Vietnam, for which he was awarded the Navy Cross, the US navy’s highest honour.

In a statement, members of the Gallagher family thanked all involved in bringing this event about.

Peter, Teresa, Rosemarie, and Pauline Gallagher, siblings of Cpl Gallagher, thanked US Secretary of the Navy Richard Spencer, Mr Schumer and his staff, but also Martin Durkin and Marius Donnelly for organising the campaign to have a navy ship named after their brother. They also thanked US Brigadier General Michael Neil.

Addressing their late brother they said: “we are very, very proud of you, we know that you, our parents and other brothers and sisters who have passed away are watching on today. Patrick lives for ever young in our hearts and minds.”

Last year in a letter to Mr Spencer, Mr Schumer asked that the next available destroyer ship be named after Cpl Gallagher as “the courage and bravery of our fallen soldiers, including those immigrants who have made the ultimate sacrifice even before they have received citizenship, is the American dream manifest.”

He continued: “Cpl Gallagher’s breathtaking bravery and courage deserves to be memorialised and naming a navy ship after the Cpl Gallagher would be the perfect tribute to recognise this Irish-American hero on behalf of a people who have contributed so mightily to the greatness of our nation.”

There was, he said, “a powerful and growing chorus of supporters from Ballyhaunis to Brooklyn who are for naming a United States Navy destroyer after the Vietnam war hero from Co Mayo, Cpl Patrick ‘Bob’ Gallagher, and I am proud today to add my voice to this very worthy cause.”

Cpl Gallagher was from Derrintogher, near Ballyhaunis, and in 1962 he went to stay with his aunt at Long Island, New York. He got a job in property and started at law school. He also campaigned for senator Robert Kennedy there in 1964.

In February 1966, he returned to Ballyhaunis for three weeks but did not tell his family he had been drafted into the US Marines. He went to Vietnam in April that year.

News of this local hero caused great excitement in Ireland. In Ballyhaunis, plans were laid for his homecoming but on the day he was due home they buried him instead. On March 30th, 1967. he was shot dead while on patrol in Da Nang.

The second eldest of nine children, his funeral was a huge event in Ballyhaunis. Among the attendance were relatives of Christopher Nevin (29) from Balla in Co Mayo, killed in Vietnam in February 1966, and of Brian Óg Freyne (21) from Ballaghaderreen in Co Roscommon, killed in Vietnam, in March 1967 also.

Among those who wrote to the Gallagher family after their son’s death wasMr Kennedy. He quoted Winston Churchill, who said “courage is rightly esteemed as the first of all human qualities because it is the one that guarantees all others”. “This courage Cpl Gallagher gave to all of us. To him and to his family are due the thanks of a humbly grateful nation.”

Towards the end of 2013 a group of Irish men had been discussing Cpl Gallagher at Mr Donnelly’s Trinity Hall pub in Dallas, Texas. In the company was pilot Martin Durkan from Ballyhaunis who supplied details of Cpl Gallagher’s story from an article in The Irish Times.

They decided to launch the online petition to have a US Navy ship named in his honour. The website “Help Us Honor A Marine Corps Hero”, at www.patrickgallagherusmc.info was sponsored by Mr Donnelly, originally from Malahide in Co Dublin. When 10,000 signatures were secured a political campaign then began in the US.

Last March members of the Defence Forces and the US army attended the unveiling of a plaque in Ballyhaunis to honour Cpl Gallagher on the 50th anniversary of his death.

Minister of State for Defence Paul Kehoe laid a wreath and unveiled the plaque, which was followed by the opening of an exhibition of memorabilia in the town friary commemorating Cpl Gallagher’s life.