Analysis: free movement of people will continue after Brexit – but issue of goods remains 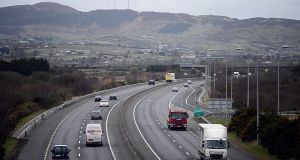 The M1 motorway between Dundalk and Newry. Photograph: Bryan O’Brien

You won’t have to pre-register to cross the Irish Border after Brexit.

Under any Brexit scenario, the continuation of the common travel area (CTA) between the United Kingdom and Ireland will remain in place – and this will allow the cross-Border movements of people to continue.

This was set down in the December agreement between the UK and EU negotiators.

The issue of registration has raised its head due to reports of the content of a report undertaken for the European Parliament last November, the Smart Border 2.0 report, by customs expert Lars Karlsson.

This report looked at, from a technical point of view, the issues needed to control the movements of people and goods on the island of Ireland post-Brexit, but makes clear political deal-making will determine the final shape of this arrangement.

It suggested some controls might be needed on the Border movements of people not covered by the CTA agreement.

When this suggestion was put to him in the United States over the weekend, Taoiseach Leo Varadkar ruled out such a development. London has also done so and it is incorrect to suggest that this is a live option being examined. It isn’t. While there are big issues in relation to controlling the movement of goods post-Brexit, the daily movement of people should continue unimpeded.

Following the December agreement, the UK foreign office confirmed the associated social and travel entitlements – to work, access social services and welfare entitlements – will continue for Irish citizens in the UK after Brexit as now.

It also said current travel arrangements between the UK and Ireland will be maintained, including movements across the Irish Border, “protecting the uninhibited movement enjoyed today”.

The December agreement also provided that citizens from other EU countries living here will have free movement across the Border after Brexit.

However, the rights of these Irish residents to work in the North or UK in future will depend on UK immigration policy post-Brexit , which has yet to be outlined in full.

Issues such as the mutual recognition of qualifications may also be relevant here.

In terms of controlling immigration from other EU countries, the UK looks set to rely largely on controls in the UK itself, rather than at its borders.

So for example, quotas or restrictions are likely to be applied at the workplace level, where UK employers will make returns detailing the employment of non-nationals.

While fears have been raised about people coming through Ireland into the UK, there would also be nothing to stop a national from another EU country arriving directly in the UK as a tourist and trying to stay on.

This is why controls at UK workplaces will be central to the new regime, along with increased reporting requirements for landlords, those handing out driving licences and so on.

New security and administrative co-operation is also likely between Ireland, the UK and EU, to oversee the movement of people post-Brexit and assure all sides that the proper controls are in place.

After all, we will now be talking about two blocs with different immigration policies and measures will continue at ports and airports to control or stop illegal immigrants and those judged as a security threat.

As Brexit approaches, other specific challenges to freedom to move and work across the Border and between Ireland and the UK may raise their head, depending on how the talks progress.

For example, will EU nationals living here be able to work freely in the North and Britain post-Brexit?

What will be the implications for employers used to moving multinational staff freely through operations in the UK and Ireland and beyond?

Will any restrictions apply on the amount or type of goods we can buy North of the Border for our own use, due to customs rules and other regulations ?

Whatever about the above, pre-registering your car before you go for a shopping trip in Newry is not on the cards.