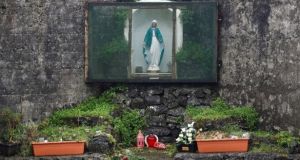 A shrine in the corner of part of the site of the former mother-and-baby home where the remains of an unknown number of infants were found buried, in Tuam. Photograph: Reuters

Survivors and family members of the 796 ‘Tuam babies’ warned on Sunday that the Irish authorities can expect public protests if they fail to carry out a full forensic excavation, exhumation, and DNA testing at the site of the former Mother and Baby Home in Co Galway.

The survivors were given a special welcome at the seventh annual flower-laying ceremony to remember the women of the Magdalene Laundry in Galway City.

The names of all of the former Magdalene Laundry detainees buried at Bohermore Cemetery were read out during the ceremony attended by former residents and members of their extended families.

Campaigners on behalf of the Tuam Mother and Baby Home families said there were clear parallels between their search for justice and that of the survivors of the Magdalene Laundries and other institutions throughout the country.

Some mothers from the Tuam home were incarcerated in the Galway city centre laundry after having their children taken from them.

Confirmation that the bodies of babies were contained in a mass grave in Tuam, some at the site of a disused septic tank, generated headlines across the globe last year.

But now campaigners are fearful that they will be denied justice, or full knowledge of what happened to the babies, on the basis of the cost involved.

Peter Mulryan, whose younger sister was one of the 796 Tuam babies, said it would compound the pain of the families if a memorial was put in place without a full forensic examination being carried out at the site.

Galway County Council is currently seeking submissions from members of the public regarding what to do with the site.

The deadline for submissions is this Thursday, March 16th.

Campaigners are concerned that the local authority may decide to put a memorial in place at the site of the former septic tank rather than the more costly option of a thorough examination.

Mr Mulryan said he could not accept the argument that a full forensic examination of the Tuam site would cost too much at this stage and pointed out that many of the mothers worked for free after being incarcerated in the Magdalene Laundries.

“When you think of the money which was made out of these women, slaving for free in laundries, it’s unbelievable the way they are still treating us,” he said.