McAleese has ‘no plans’ to campaign on abortion referendum 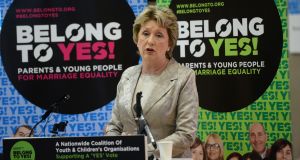 Former president Mary McAleese speaking at an event in 2015 calling for a Yes vote in the referendum on same-sex marriage. Photograph: Dara Mac Dónaill

Former President Mary McAleese says she has no plans to take part in the campaign for repeal of the Eighth Amendment.

In an RTÉ radio interview on Monday, she said she was disappointed the Eighth Amendment did not do what it had been supposed to do but she declined to be drawn on how exactly she planned to vote.

She said she had a lot of reading and analysis to do, and was awaiting the wording of the referendum.

Having listened to the evidence of obstetricians like Peter Boylan and Rhona Mahony, she said it was obvious that they felt they were hampered and that the law was “too tightly written”.

The case of Savita Halappanavar had also caused her great concern.

Repeal of the Eighth Amendment was not as easy an issue as the referendum on same-sex marriage. “This is infinitely more complex,” she said.

Ms McAleese said she has not yet read last week’s Supreme Court ruling, nor the Government’s policy paper on how it planned to legislate on the issue. However, he information given by the obstetricians had been compelling, and raised “profound questions.”

People were being offered two possible abortion models, one for where the life of the mother was at risk and the other as a non-medical procedure. “That’s a jump that people will find it difficult to make,” she said.