Visiting Taoiseach thanks Native American community for generosity during Famine 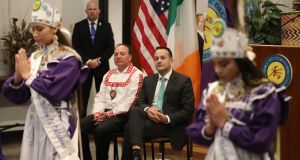 Taoiseach Leo Varadkar watches a cultural display from members of the Choctaw nation at the Choctaw tribal council in Oklahoma on day two of his US visit. Photograph: Niall Carson/PA Wire

Taoiseach Leo Varadkar has announced a new scholarship for Choctaw people to study in Ireland, as he paid his first visit to the Native American community in Oklahoma.

Addressing members of the Choctaw nation at a ceremony in Durant, Oklahoma, on Tuesday, Mr Varadkar said the new scholarship would begin in the autumn of next year.

“This is an opportunity for us to learn from you and from your culture, and you from ours, in a sharing of knowledge that will enrich both our peoples,” he said in his speech.

Mr Varadkar made the visit to thank the Choctaw community for their donation to Irish Famine victims in the 1840s. In 1847, despite undergoing their own hardship as they were moved off their native lands by the US government, the Choctaw tribe donated $170 to the victims of the Irish Famine in the 1840s – the equivalent of about €4,000 in today’s money.

The tribe has more recently donated money to Irish causes. The Choctaw nation donated $8,000 to the Shell to Sea campaign in November 2007. Representative Waylon Gary White Deer announced the donation when he visited north Mayo that year, speaking at the annual hedge school run by the NGO Afri. The money came from unspent funds collected in Ireland and the US for Choctaw victims of Hurricane Katrina in 2005.

Speaking at a reception to mark the visit, Mr Varadkar said the act of kindness to Famine sufferers had “never been, and never will be, forgotten in Ireland”.

He presented Chief Gary Batton, the 47th chief of the Choctaw nation, with a hurley and a copy of the Atlas of the Great Irish Famine. The ceremony, which began with a Native American prayer, also included traditional dance and music from the Choctaw tribe.

Mr Batton said that both nations “have shared a similar history of tragedy, perseverance and strength”.

Mr Varadkar’s visit comes less than a year after Chief Batton was welcomed by President Michael D Higgins at Áras an Uachtaráin in June. He and a delegation of more than 15 representatives from the Choctaw nation also visited Midleton in Co Cork for a ceremony to celebrate the designation of a specially commissioned sculpture to mark the act of generosity.

Entitled Kindred Spirits, the sculpture by Cork-based sculptor Alex Pentek is designed in the shape of a food bowl and commemorates the donation.

Earlier in the day, Mr Varadkar met Oklahoma governor Mary Fallin who has strong Irish roots and is a close ally of US president Donald Trump.