Greyhound Board investing €12m to upgrade stadium and develop sport 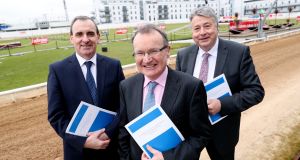 Economist Jim Power (centre) with Gerard Dollard chief executive of the Irish Greyhound Board (left) and Phil Meaney IGB chairman at the publication of the strategic plan. Photograph: Maxwells

The Irish Greyhound Board plans to spend up to €12 million over the next five years upgrading the country’s main greyhound racing stadium at Shelbourne Park, supporting breeding and training of dogs and addressing the negative image of the sport.

The chairman of the IGB, Phil Meaney, said on Monday the Strategic Plan 2018-2022 was an opportunity for “a new beginning” for greyhound racing in Ireland.

An economic analysis and assessment of the greyhound industry, carried out by economist Jim Power, said over 12,300 people derived economic benefit from the sector.

These included 5,058 people employed full-time and part-time, and the 7,313 dog owners who made money from breeding, training and racing dogs. The sector contributed €300 million in economic activity, according to his report into its economic and financial significance.

Mr Meaney said the IGB had been strait-jacketed in recent years because it was carrying debts of some €20 million.

This would be cleared shortly by the sale of the Harold’s Cross, Dublin, stadium, with between €4 million and €5 million left over for reinvestment.

The remainder of the €12 million to be invested would come from business activity of the board.

Addressing this decline, regenerating the sector and addressing negative perceptions would be done in seven different ways, the report suggests.

The first would aim to support and encourage breeding owners by more active involvement of the board itself and also the possible creation of an academy, similar to that run by the horseracing industry, which would offer breeding apprenticeships, as well as promote training and research.

The second will involve maximising betting opportunities by increasing use of tote (or pooled) betting and online betting. Prize money was increqased by 25 per cent last year.

Thirdly, Shelbourne Park in Dublin, the sport’s main stadium, will be refurbished and, at Limerick stadium, increasing the width of the race track to accommodate eight, as opposed to just six, dogs.

The sport needed to promote attendance with themed racemeetings and engage more actively with younger people by changing “the negative political media narrative and create a better reputation”, according to the plan.

Two other targets relate to getting the most from the IGB’s own staff, and maximising the use of social media to attract more people into the sector.

Two of the targets relate to how to deal with the poor image of greyhound racing, which relates to perceptions of widespread doping of dogs and their ill-treatment when their racing days are over.

The board says it wants to ensure the highest standards of integrity and regulation in the sport, and to this end now has a veterinary director.

“Our welfare officers have legal authority to inspect kennels, issue fines and initiate prosecutions, in some cases with the co-operation of the gardai,” said IGB chief executive Gerard Dollard.

All reports were “fully investigated”, he said.

“From 5,294 samples taken from greyhounds at race tracks, private kennels and sales meetings in 2017, there were 29 adverse findings for prohibited substances.

Every adverse finding and every subsequent fine or sanction is published on our website for all to see.

“Three individuals have been banned for doping or welfare offences. These individuals are disqualified from owning, training or managing a racing greyhound.

“The conversation has been dominated for too long by animal rights activists who are opposed to the use of animals for all sports or entertainment purposes.”

Proclaiming that the motto for their sector was “We love our greyhounds, and we care for them”, Mr Dollard said he wanted to see the racing life of a greyhound extended from the current usual limit of age four years to six years (with each race meeting required to run at least one senior race), and greater engagement by the board with greyhound retirement schemes - both the board’s own Irish Retired Greyhound Trust and other like-minded organisations.

“Welfare is a central focus of the plan,” he said. “We have sought the introduction of a traceability system so that we can insure each dog is tracked throughout its racing life and post that period.

“And we would also see the racing life of greyhounds extended by having veteran and senior races to ensure that slightly older dogs become a recognised part of the dog racing fraternity.

“The IGB also has a key focus to the Irish Retired Trust, which we set up over 10 years ago, and that focus is on the re-homing and welfare of greyhounds after their racing life.

“The Trust has re-homed over 4,600 greyhounds, and that’s not to take account of other organisations, which the IGB also supports and has resulted in similar levels of re-homing activity.

“The intention is to expand this work by forming other strategic partnerships wholly dedicated to the welfare of greyhounds with the primary goal of ensuring that all greyhounds have a happy and healthy retirement when their racing career is finished.”

“We need to set our sights high by placing all retired dogs in happy homes, not simply re-housing in boarding kennels,” says the plan, which adds that an additional welfare officer would be hired to liaise specifically to sell this message.

Mr Dollard also noted the IGB needs “to assist sponsors in dealing with the negativity which is directed at sponsors in relation to the perception that there is around greyhound welfare and integrity”.