Widow wins four-year battle to have pyrite in home removed

One year on: campaigners frustrated over State ‘inertia’ as many remain in limbo 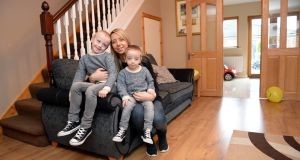 Tara Devon and her two children Ryan (6) and Kian (3) at their home in Ashbourne in January 2017. Photograph: Eric Luke/The Irish Times

When Tara Devon’s husband Colm was diagnosed with pancreatic cancer he asked his wife to “do whatever it takes” to have the pyrite in their home in Ashbourne, Co Meath removed.

Colm died in September 2016 at the age of 36, leaving behind his wife and their two boys, Ryan (6) and Kian (3), as well as a house which was significantly devalued due to pyrite.

It has taken four years for this day to come, but finally their house has been accepted onto the Government remediation scheme to remove the pyrite. It was not without a substantial struggle.

Pyrite is a mineral which can swell under certain conditions and it can be found in construction materials such as backfill. It can cause walls to crack or bulge and lateral movement in walls and floors.

It is estimated there are between 12,000 and 20,000 properties affected by pyrite in Ireland. They are largely found in the east of the country and were built during the Celtic Tiger era.

Homebond, one of the largest household insurance companies at the time, insisted it was not legally obliged to provide compensation. It transpired that there was not sufficient legislation to hold builders, suppliers and certifiers to account for substandard housing.

More stringent building regulations have since been introduced to ensure this cannot happen again.

Houses found to be affected by pyrite are significantly devalued due to the cost of repair - which can be up to €70,000 - and because mortgage providers will not approve any lending for a house which contains pyrite.

This has left many homeowners with no option but to fight for acceptance onto the Government’s remediation scheme.

“Even when poor Colm was sick he was doing everything he could [to get the pyrite repaired],” Ms Devon says.

Dave McGinley, a spokesperson for the Pyrite Equality Group, said although it was “great news” to hear Ms Devon has finally been accepted onto the scheme, “she really had to battle to get there”.

“Yet in the midst of her husband dying, she was cruelly denied onto the scheme for so long as her damage just wasn’t bad enough,” Mr McGinley said.

But Ms Devon was determined to carry out her husband’s request.

“He didn’t want to leave knowing that me and the boys had nothing. That was our one asset,” Ms Devon says.

“His exact words were ‘do whatever it takes to get it done’”.

“From that point I just didn’t want to be there, there were so many memories...but I was stuck.”

When Ms Devon last spoke to The Irish Times, just over a year ago, her house was 3mms away, in terms of the movement of damaged walls, from being accepted onto the government remediation scheme.

Since then, she has had engineers out to examine the movement, a sample of the foundation sent to the UK to test for pyrite damage and a lengthy wait to be given dates for repair.

Finally, on February 26th, work began on clearing her house of pyrite. It will take three months to complete, so Ms Devon and her two children have moved back into her parents house in Ashbourne - which also has pyrite.

“Although it’s stressful trying to pack up your whole house - I work full time and I’m on my own with the boys in the evening - I know that there’s a light at the end of the tunnel now.

“I know that once these couple of weeks are over we’ll be ok again; I have something to give them [her sons] for their future when I’m gone - something that they can build their lives on.”

The foundation and flooring in her house will now be dug up and replaced and she will be issued a Green Cert from an engineer to prove it is free of pyrite, bringing the house back up to market value.

Ms Devon plans to sell the house and find somewhere else for her and the boys to live in Ashbourne, so she can move on from the “memories” and trauma associated with the house.

‘Ground down through inertia’

The situation for many other pyrite homeowners, however, has not become any better over the last year.

The Pyrite Equality Group has campaigned for greater access on to the government remediation scheme for people who they said were left in limbo - where their house was deemed not bad enough to be repaired yet was still sufficiently devalued because they are linked to pyrite.

It is not clear how must the State has set aside or spent on remmediation for pyrite affected homes.

Mr McGinley, who lives in one of these pyrite-affected homes in Ashbourne which has been deemed not fit for remediation, gives the example of an un-tested house in his estate which recently sold for €150,000.

“Similar properties in non-pyrite estates in Ashbourne are currently [valued]at the €260,000 mark,” he says.

As well as decreased value, houses in pyrite estates which are not deemed bad enough to be accepted onto the remediation scheme are also hit with other obstacles.

“A mortgage provider will not approve mortgage on a house in the estate unless it’s been remediated or has been issued a Green Cert.

“House insurance policies are restricted - there’s no cover for water or gas damage because they say a fire could be caused by pyrite damage to pipes”.

Mr McGinley says campaigners now feel “very burned out and drained trying to get anything done”.

The National Standards Authority of Ireland (NSAI) published a new set of classifications for pyrite damage in August 2017, which he says “muddies the waters” even further.

Those classifications led to concern over the new Category B, which refers to “minor damage” that can be “easily treated using periodic repairs, eg, cracks easily filled, repointing of external masonry”.

Although it was hoped that this category would help people who have had difficulty selling their homes by offering reassurance as to the extent of the pyrite, campaigners felt it could mean less people would qualify for remediation.

Speaking to The Irish Times last August, Mr McGinley said “it will reduce the numbers of people who need to be remediated because what they are saying is that you can self-remediate at home.”

Mr McGinley says that despite numerous media reports highlighting campaigners concerns around the new classifications, as well as offering proposed solutions to the problem, there has not been “a single iota of movement or output from the Dáil”.

He says this has left them feeling “ground down through inertia”.