Post-Brexit transition period may need to be extended - Coveney 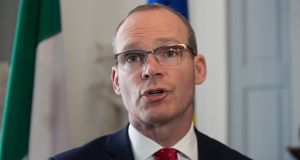 Tánaiste and Minister for Foreign Affairs Simon Coveney: ‘In truth, there is no way we are going to have a detailed free trade agreement negotiated before Britain leaves the European Union’. Photograph: Gareth Chaney Collins

The temporary transition period starting after Britain leaves the European Union in just over a year’s time may have to be extended beyond the end of 2020, Tánaiste Simon Coveney has said.

Speaking in Hong Kong at the start of his St Patrick’s Day visit to China, the Minister for Foreign Affairs suggested there was a need for flexibility around the duration of the post-Brexit transition to allow businesses and traders adapt to “a new reality”.

“If it needs to be extended, well then it can probably be extended for a short period after that if that’s what’s necessary,” Mr Coveney said in an interview with Bloomberg Television.

Brexit negotiations between the EU and the UK have been drawn out by disagreements over the terms of the withdrawal agreement proposed by Brussels; the transition arrangements, including around the protection of citizens’ rights; and on future trading relations after the UK quits the EU next year.

The UK is hoping to reach an agreement on an “implementation period” that would prevent a shock to its economy from a “cliff-edge” abrupt exit from the EU on the scheduled departure date of March 29th 2019.

“Both sides are very anxious, as indeed Ireland are, to try to get clarity around transition,” said Mr Coveney, the Government minister leading the Irish team in Brexit negotiations.

The Tánaiste said that it could take the entire transition period for a future trade agreement between the UK and the EU to be concluded.

“In truth, there is no way we are going to have a detailed free trade agreement negotiated before Britain leaves the European Union,” he said.

Mr Coveney said that it would take “years” to agree a free trade deal given the complicated areas it covers, from aviation to food to financial services, but he hoped a framework agreement would be place by October or November which will set the parameters to agree a free-trade agreement in the future.

He has said previously that the transition period could take up to five years.

On the issue of the future of the Irish Border, Mr Coveney told Bloomberg that the Government was happy to talk to London about how to prevent border checks on goods moving north and south after the UK leaves the customs union.

But in the absence of an agreement on this, the Irish Government was “very clear” on the default position set out the commitment given by Ms May’s government in the December agreement that there would be no hard border on the island of Ireland, he said.

The Tánaiste said that the Government wanted a “more comprehensive solution” around the problem of the UK leaving the customs union and single market whilst avoiding a hard border on the island of Ireland.

“But at the moment it is very difficult to see how that could work unless the British government changes its approach towards a future relationship with both the single market and customs union, which so far they haven’t been willing to do,” he said.