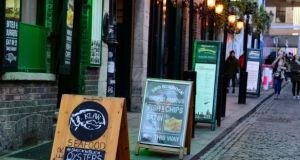 Dublin City Council has carried out more than 400 inspections since 2017 in an effort to clamp down on unauthorised advertising signs appearing on the capital’s footpaths.

Pubs, restaurants and cafes place signs on the footpaths outside their premises in an effort to lure customers. The signs usually show the business’s name or menu or display a “funny” message - “money can’t buy happiness but it can buy coffee and that’s pretty much the same thing” and so on.

But councillors have complained about a proliferation of A-frame billboards which they say crate obstacles for pedestrians and, in particular, people with mobility difficulties.

Dublin City Council said it is reviewing its approach to advertising boards, an additional four inspectors have recently been appointed with authority to issue removals notices and remove unauthorised advertising boards.

According to figures released by the city council, Temple Bar came in for the most inspections with popular city centre areas such as Grafton St, Capel St, O’Connell St and Westmoreland St also receiving a large amount of inspections.

In most cases the businesses removed unauthorised signs following an inspection. In other cases a further warning notice was necessary to convince the businesses to get rid of the signs. Failing that, the council would seize the sign.

“If the notice is ignored or where signs or furniture routinely appear after previous notices have been issued, the sign is impounded,” the council said.

“The owner may redeem the boards by paying the cost to Dublin City Council of removal and storage of the boards. In some cases, the boards are not redeemed as replacement boards are provided by suppliers for advertising purposes.”

Restaurants, cafes and bars need a licence to put tables and chairs on the footpath outside their premises. But Dublin City Council chief executive Owen Keegan said there has been a creep of unlicensed structures as well as advertising boards in the city centre.

In January, Mr Keegan said the city council intended to address the issue of unlicensed street clutter. The Restaurants Association of Ireland at the time accused him of going on an “anti-tourism rampage”.