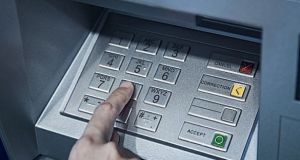 Two men appeared in court on Saturday afternoon charged in connection with the possession and use of ATM skimming devices in Kildare and Blanchardstown earlier this week.

The Moldovan nationals were arrested on Friday evening and appeared at a sitting of the Dublin District Court. Applications for bail were made on behalf of both men but were denied.

Nicolai Levinte (30) and Eugenia Muntean (34) were subsequently remanded in custody and are set to appear before Cloverhill District Court next Friday morning.

Skimming devices are fitted to bank machines in a effort to record customer's bank card details and defraud them of their money.

After the three charges concerning the use of ATM skimming devices were put to him, Mr Muntean replied “I understand”.

Det Garda Kelly objected to bail because of the seriousness of the charges. They carry a maximum sentence of 10 years on conviction and Det Garda Kelly was also concerned that the accused could flee the jurisdiction.

The 34-year-old has been in the country only several weeks and had not given gardaí an address at which he was staying.

Judge John Cheatle refused bail. But he said an appeal to the High Court was open to Mr Muntean.

Bail was also objected to in this case and the application was refused.

1 Full line up of junior ministers unveiled as Taoiseach accused by one TD of snub
2 Bobby Storey: The IRA's planner and enforcer who stayed in the shadows
3 Who are the new junior ministers? All their profiles are here
4 Covid-19: Tourism chief to urge quick reopening of Ireland to overseas visitors
5 Coronavirus: Three more deaths, six new cases confirmed in Republic
Real news has value SUBSCRIBE