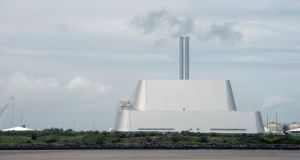 Poolbeg incinerator operator is to apply to An Bord Pleanála to take 15 per cent more waste than the plant’s current 600,000 tonne limit. Photograph: Brenda Fitzsimons

The operators of Dublin’s Poolbeg incinerator have confirmed they will seek permission this year to burn an additional 90,000 tonnes of waste annually at the plant.

It emerged in recent weeks that US waste firm Covanta was entering talks with An Bord Pleanála in relation to the application process for increasing the incinerator’s capacity.

The plant’s managing director, John Daly, has now confirmed the firm will make an application to the board to take 15 per cent more waste than the incinerator’s current 600,000 tonne limit.

Mr Daly said he hopes to be in a position to start processing the additional 90,000 tonnes of waste in 18 months’ time, and said there was an industry demand to burn 850,000 tonnes annually at the plant.

A number of groups have criticised the expansion plan, including the Green Party, which said it was “incredibly short-sighted” and “would have a hugely negative affect on local residents”.

Mr Daly said the additional 90,000 tonnes of waste could be accommodated within the existing plant without any need for a physical expansion.

Green Party councillor Claire Byrne said the increase would have an unacceptable effect on the local community.

“Increasing capacity by 90,000 tonnes per annum will result in at least 18 extra trucks per day passing through residential areas.”

However, Mr Daly said this was not the case. “We are currently taking in 90 trucks per day if we got an extra 15 per cent we would be at 105 trucks per day” but he said that would “still be well below the original figures”.

The application for the incinerator, which was approved in 2007, 10 years before the incinerator opened, included a provision for 121 lorries delivering to the plant each day. However, with the plant currently operating at full capacity, an average of 90 trucks a day deliver waste to it, almost all of which come via the Port Tunnel, Mr Daly said.

There had been “a lot of scaremongering” about trucks before operations began, he said. “It was continually in the papers about trucks clogging up Sandymount – no trucks come that way. They just don’t. They all come through the Port Tunnel, the only ones that are allowed come through that area are the ones collecting in that area.”

Tests had shown that the plant could cope with 690,000 tonnes annually, he said, but that this was probably the upper limit of its capacity.

“In 2016 we went out and sought indications from the waste industry in relation to how much they would be interested in supplying us we got interest of 850,000 tonnes,” Mr Daly said.

“I have people who want to bring more waste into us, and we can’t take it at the moment. We are going to take 600,000 tonnes this year and we could probably hit 800,000 tonnes if we had the capacity. We don’t have the capacity and the plant couldn’t do that.”

The plant had a rocky start in June of last year with a lime leak resulting in 11 workers being hospitalised and the plant being shut down for several weeks. Earlier this year Covanta was fined €1,000 for a breach of its Environmental Protection Agency licence, in relation to a separate incident which also occurred in the first week of operations.

However, Mr Daly said the public should have no concerns that it would be able to manage additional waste.

“We’ve had very smooth operation for all of 2018. The emissions results are there and are transparent, there’s nothing hidden. We operate a very safe plant, a very efficient plant, and I think that we’ve shown over the last 12 months that to be the situation.”