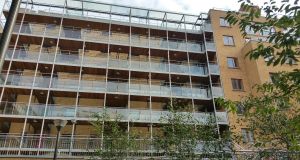 The “naked greed” of some private landlords and large scale property investors is driving “eye-watering” rents in Dublin, the chief executive of one of Ireland’s largest housing associations has said.

The association, which hit a milestone last month in providing its 4,000th home, is seeking to increase its purchase of property for use as social housing. However, Mr O’Connor said it was facing increased competition from institutional property investment firms.

“When we are looking to buy our biggest competition is investment funds. It’s very hard to compete with them. We were recently bidding on 115 apartments but were outbid at €36 million. If people are paying that amount of money the only way the investor is going to get their money back is by charging eye-watering rents,” he said.

“It’s self-fulfilling. The more of this type of money that’s ploughed in, the more rents will increase.”

Tuath did however, have recent success in buying Harold’s Court, a block of 23 vacant apartments, on Parnell Road opposite the Grand Canal. The block had gone on the market with a guide price of €7.25 million, Tuath paid €8.75 million.

“In this case we managed to stave off competition from a Reit [real estate investment trust] which doubtless would have charged very high rents.”

While Tuath’s principal activity is the provision of social housing, it’s also supportive of the new cost rental model, where qualifying low- and middle-income workers pay below market-rate rents, based on the cost of providing the accommodation.

“We’re currently working with Dún Laoghaire-Rathdown County Council and Respond on 155 homes in Stepaside, one-third will be let equivalent to the cost of providing the units, hopefully at 25 to 30 per cent below the market rent, and two-thirds will be social. We think it will be first cost rental scheme in the country.”

Cost rental, or affordable rental has been the “missing link” in housing provision, Mr O’Connor said.

“The private rental market is quite frankly disgusting in certain areas, it’s just naked greed. I have no problem with people making a profit, but it is wrong to profiteer on the back of people who have no choice,” he said.

“There are a lot of decent private landlords, there are also a lot of chancers.”

Tuath, a not-for-profit organisation, provided 837 homes last year, a figure it hopes to match this year. Its largest scheme last year, and one of the largest apartment schemes built in the State in 2017, was a development of 122 apartments, completed in collaboration with Dún Laoghaire-Rathdown County Council and Nama on the site of the old Dún Laoghaire golf course near Glenageary.

To date this year it has provided 415 homes, with recent acquisitions including Shelbourne Plaza, 53 apartments it bought from Dublin City Council at a cost of €22 million. It also recently bought 26 apartments on Castleforbes Road in the north docks for just €5 million – “fantastic value because the Docklands Authority bought it pre-boom,” Mr O’Connor said.

It is also currently building on sites across the country, including in Sallins in Kildare, Navan, Co Meath, and Crumlin in Dublin. However, Mr O’Connor said, his preference is to buy homes.

“Buying is less risky than building, although some buildings built during the boom do have legacy issues. I’d sooner buy any day.”

He rejects the suggestion that by buying, rather than building he is contributing to pricing first-time buyers out of the market.

“We’re not competing with owner-occupiers, they are not who’s buying the sort of properties we’re going for, these are only being bought up by large funds.”