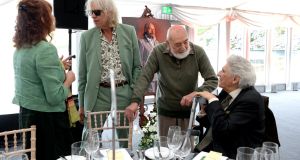 In a simple ceremony on the edge of Lough Tay, the ashes of Garech Browne, art collector, patron of the arts, and a Guinness heir, were poured into its waters by his nephews Dorian and Julien, while his friends remembered riotous days.

The short ceremony, attended by 200 guests, including the President of Ireland, Michael D Higgins, and his wife, Sabina, was followed by speeches and lunch in a marquee between the lake and Luggala House.

The stories were legion. Film-maker John Boorman said he and Browne had been “devoted friends” for 45 years: “He was always late and I was always on time. I calculated that I spent four weeks of my life waiting for him.”

In many ways, the two were opposites. “I was a workaholic, and he was an alcoholic,” Boorman told guests, adding that Browne had been “funny and witty” and they had had wonderful conversations when “the sober Garech would arrive”.

Browne had been so saddened when Luggala, which had been a wedding gift to his mother Oonagh, nee Guinness, was put up for sale that he told Boorman he had wanted to die.

The film-maker said he called around and offered to help his friend die: “I said I will put this over your face and it will all be over in about five minutes. He went silent for a while and said ‘I don’t want to die today,’” he said, to laughter.

British peer Lord Gowrie recalled long lunches at the Roundwood Inn, including one occasion when Browne drove home along a perilous mountain road with sheer drops on one side.

Lord Gowrie said he had travelled in pure terror as Browne bashed the car off rocks he had expensively installed at various points to beautify the avenue running up to the house.

Browne died in London in March aged 79 years. Paying tribute, Mr Higgins said Browne, who was one of the founders of Claddagh Records, had made a “unique contribution to Irish culture”, particularly song and poetry.

Having left the podium, Mr Higgins returned to interrupt Paddy Moloney of The Chieftains who was playing a lament, to say he had left some parts of his speech out and would continue.

Apologising to laughter, he said the work of the artist was “to be disruptive”, adding, “I am an artist myself.”

The writers Robert O’Byrne, who wrote Luggala Days: The story of a Guinness house, and Paul Howard, who wrote I Read the News Today, Oh Boy, a biography of Browne’s brother Tara, were also present.

Paying his own tribute, Dorian Browne said he had known Garech Browne best and fondly as his uncle, though he knew, too, of his important cultural influence: “Given how many of us are buried here or come to rest here, I think it is only right that Garech finally joins them,” he said.

His grandmother, Garech’s mother, who was a strong influence on her son, “had all these talented, brilliant, slightly mad people to come to Luggala”, where they mixed together “and bounced off each other”.

Browne’s wife of 37 years, Princess Harshad Purna Devi of Morvi, daughter of the last Maharaja of Morvi, sent her apologies asking the attendance to consider her to be there in spirit.