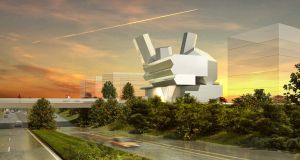 Steven Holl Architects had competition from 98 teams from 28 countries and the shortlist included some of the world’s top design practices including Studio Libeskind, John Ronan Architects and Diller Scofidio + Renfro

A New York-based firm of architects has been selected to develop a €48 million centre for creative design and new entrance at University College Dublin (UCD).

Steven Holl Architects saw off competition from 98 teams from 28 countries with their design inspired by “the geometries of Giant’s Causeway” and the work of James Joyce, particularly the “principals of stream of consciousness thinking”.

The development on an almost 24 hectare site to the east of the campus will also involve the creation of a new entrance to the university from the Stillorgan dual carriageway, a long-held ambition that was shelved during the property crash.

The project brief for the design competition said it should look to address the current difficulties with the “arrival experience” at UCD, which was considered “underwhelming”. The entrance was “ framed by 1960s traffic engineering, is low key, nondescript and unfriendly to pedestrians and cyclists”.

The overall design will involve the development of seven new quadrangles of open green space, a new pedestrian spine, parallel to the campus’ original walkway, lined with weather canopies that double as solar connectors, to form the infrastructure of an energy network.

Cafes and social spaces will be located along paths with landscaped areas surrounding water-retention ponds, along with rain- and wind-protected seating areas and preserved specimen trees.

The main design centre building, set by a plaza and a reflecting pool, will feature two vertical structures angled at 23 degrees, “mirroring the Earth’s tilt”. Its auditorium has been designed to echo the shape of UCD’s dodecahedral 1972 water tower; the “centre’s towers respond to the water tower’s pentagonal pillar”, according to the designers.

“The centre for creative design promises to be an exhilarating presence, announcing UCD from afar, creating a new Dublin landmark, and giving visitors, students and faculty a definite sense of arrival.”

A spokeswoman for the project said details on the height of the building were not yet available as it was a “concept” design only.

“The design will now be developed in consultation with UCD, stakeholders and planners and will take many, many months of detailed design work before the final planning applications are made.”

The university hopes the work will be completed by 2021, she said.

The creation of a new entrance and landmark building at the dual carriageway side of the Belfield campus was central to a previous campus development plan in 2004, but was shelved after the financial crash in 2008.