First ever women’s symposium at World Meeting of Families 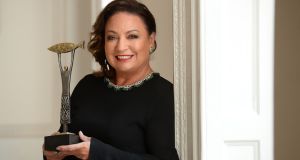 The ‘Voices of Impact: Women Leaders Shaping Global Change’, at the RDS on Saturday August 25th. as part of the World Meeting of families, will be chaired by broadcaster and entrepreneur Norah Casey. File photograph: Dara Mac Donaill

A symposium dedicated to the global impact of women’s leadership will be held as part of the World Meeting of Families (WMF) later this month.

The ‘Voices of Impact: Women Leaders Shaping Global Change’, at the RDS on Saturday August 25th will be chaired by broadcaster and entrepreneur Norah Casey and US business executive Susan Ann Davis.

It is the first time such a symposium has taken place as a WMF event. Tickets are free. Scheduled to begin at 8 o’clock in the morning, it will conclude by 11 am. Pope Francis is due to land at Dublin airport that morning at 10.30am.

Women taking part were personally invited by Archbishop of Dublin Diarmuid Martin in a letter last month. He said it would “spotlight the role of women within the family alongside their role as change agents starting and running businesses, fighting poverty and human trafficking, providing health care and education for the poor and, for many, leading corporations, NGOs and countries.”

The symposium, he said was “based on the simple yet powerful premise that the changing role of women across all spectrums of life is having a real and positive influence on the future of society”.

Redemptorist priest Fr Tony Flannery said he found it “somewhat bizarre that a senior member of the Church, which has blocked equality for women for centuries,” could write that latter sentence “without recognizing the irony of it.”

Other speakers will include: Sinéad McSweeney, vice president of Public Policy and Communications, EMEA at Twitter and managing director, Ireland; Leanne McDonagh a Traveller and graduate in Fine Art; and Aoibheann Mangan (11) of Hollymount, Co Mayo, EU Digital Girl of the Year.