Portable apartments not reserved for homeless due to ‘ghetto’ fears

Council may use emergency planning powers to build housing 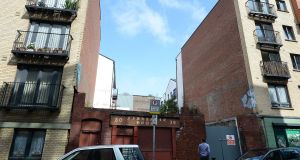 That vacant property site on Fishamble street had been earmarked by the council for a pilot owner-designed and built apartment scheme. Photograph: Cyril Byrne / The Irish Times

Prefabricated “rapid delivery” apartments planned for a Dublin City Council-owned site on Fishamble Street will not be reserved for homeless families as the local authority does not want to create a “ghetto” in the area.

Tenders were sought by the council last month from modular housing builders to provide and erect the city’s first “portable” apartments on the site close to Christ Church Cathedral.

The council had previously intended to transfer homeless people from emergency accommodation to the block of five apartments.

However, Brendan Kenny, deputy council chief executive and head of housing, said the council did not want to create a “ghetto” on the site.

“Initially rapid build was just for homeless families, but an issue arose that we could be creating ghettos, so they will be used for general [social] housing, although we might have one or two homeless couples in Fishamble Street.”

While tenants will be selected from the general social housing waiting list for this and other modular apartment and housing schemes, the council still hopes to use the emergency planning process introduced by the Government to deal with the homelessness crisis.

“We did use the emergency provisions in planning legislation to speed up that particular process and we may use that again for the upcoming new rapid build projects,” Mr Kenny said.

Under these provisions, the council does not have to go through the normal planning process for local authority developments, if the council chief executive determines there is a need to deal urgently with “an emergency situation calling for immediate action”.

Mr Kenny said council management believes the current housing shortage, not just the homeless problem, qualified under these provisions “on the basis that there is an ongoing housing crisis”.

The council two years ago completed its first rapid-delivery modular housing estate in Ballymun, which was used to house homeless families living in hotels. It has since completed similar schemes at sites in Finglas, Drimnagh and Darndale. The emergency planning legislation was used for all of these schemes.

The council expects the Fishamble Street apartments, designed by Walsh Associates architects, to be completed by March.

Tenders for a second rapid-delivery apartment scheme at Bunratty Road in Coolock will be issued shortly. This larger project will see the construction of 64 apartments in four, four-storey blocks, along with 14 modular houses. These homes will also be used to accommodate people on the council’s general housing waiting list.

The four-storey apartment blocks on Lewisham High Street were built in 12 weeks at a cost of about £150,000 (€168,000) per apartment. The borough council plans to leave them in place for three years, after which they will be “unstacked” and moved to another location.

The derelict site at 29 and 30 Fishamble Street, previously occupied by two 18th century buildings, had been earmarked by the council for a pilot owner-designed and built apartment scheme, but after several years of preparation this plan was shelved in 2015, and the site has remained vacant.