Decision on plaza and construction of 3,000 homes delayed by Bord Pleanála 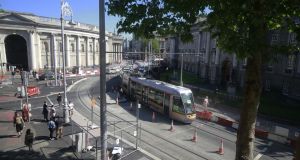 A decision on the €10m civic plaza at College Green, already been beset by delays, will not be made until October 5th. Photograph: Nick Bradshaw

Two of the most significant development projects planned for Dublin are facing lengthy delays because of a severe backlog of cases before An Bord Pleanála.

The board has had to delay decisions, due this month, on both the College Green plaza development and the construction of more than 3,000 homes on the Poolbeg peninsula because it has not been able to process the volume of appeals it receives, it has emerged.

A decision on the €10 million civic plaza at College Green, which has already been beset by delays, had been due this week, but will not now be made until October 5th, leaving commuters to face ongoing traffic congestion and diversion of public transport in the heart of the city.

Dublin City Council said it had not been notified of any change in decision date by the board, which had originally been due to issue its verdict last November.

The plans for the fast-track development of up to 3,500 apartments in a new strategic development zone (SDZ) centred on the former Glass Bottle site at Poolbeg were due for a board decision last week. This has been delayed indefinitely.

A letter from the board, seen by The Irish Times, states it has not been able to make its August 1st deadline, and no new decision date has been set.

The inspector, who conducted the hearing on the Poolbeg development last April, has delivered his report to the board, the letter states, but the “continuing delay is due to necessity to clear the current backlog of cases” waiting to be assessed by the board. “The delay involved is regretted,” the letter says.

The board has a target of processing planning appeals within 18 weeks, and had been achieving that goal in 80 per cent of cases . However this year, just 35 per cent of cases have been determined within that time frame.

A spokesman for the board said the number of board members had more than halved last year to just four. While numbers had since been increased to 11, it was still working through the resulting case backlog. A “hugely revamped” IT system had also resulted in delays, he said.

Dublin City Council approved plans for the fast-track development of homes for up to 8,000 people in a new urban quarter at Poolbeg last September, but the scheme was appealed to the board.

If the board approves the SDZ, the council will have the power to grant planning permission that cannot be appealed to the board. Landowners could secure permission within two months of submitting their application to the council.

The failure of the board to issue a decision was a “disaster” for the thousands of families hoping to set up home in the area, Labour Senator Kevin Humphreys said.

“This was meant to result in ‘fast-track’ housing but I haven’t seen any urgency from the Minister for Housing to get what was meant to be one of the key projects to deal with the housing crisis over the line.”

An Board Pleanála needed to be “properly resourced” so it could make timely decisions on essential developments , Mr Humphreys said.

“We won’t see homes get out of the ground if they can’t get out of the starting blocks at board level. This delay is a disaster and heartbreaking for people who need homes.”

The city council had expected a decision from the board on its plans for the pedestrian and cycle plaza last April.

However, the following month it said it did not expect a decision until August because of the “intricacies” of the case. The board has said it hopes now to make a decision on October 5th.