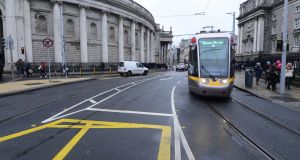 Dublin City Council knew more than a decade ago that it was going to have to do something about the volumes of traffic coming through College Green. Photograph: Cyril Byrne

The College Green Plaza project has been dogged by rows, errors and delays in the years since it was first proposed.

The wearying march towards the Poolbeg peninsula development has been less dramatic of late, but it has had its moments in the last decade or so. Its delay is more serious, holding back as it does the development of homes and not just a city centre showpiece.

But both major development projects, which were almost over the line, have now stumbled at the last hurdle because of a logjam in the planning process.

Dublin City Council knew more than a decade ago, when the cross-city Luas line was proposed, that it was going to have to do something about the volumes of traffic coming through College Green.

In September 2015, three years after the Luas got planning permission, then executive manager of the council’s traffic department, Declan Wallace, said College Green traffic changes needed to be agreed “urgently” to be in place ahead of the start of Luas operations in December 2017.

In December 2015, council chief executive Owen Keegan told The Irish Times bus usage of College Green would have to be restricted.

But it was not until May last year that the council submitted a planning application for the plaza to An Bord Pleanála. It had hoped for a swift decision. The board had initially intended to issue one last November, the month before the cross-city Luas began running.

However, following a large number of appeals, including one from Dublin Bus which said taking buses out of the plaza space would be “socially regressive”, the board decided to hold a public hearing.

This was scheduled to run in January, but days before it was due to begin the hearing had to be postponed because of errors in a newspaper notice published by the council, on the board’s instruction, the previous November.

The hearing was rescheduled for March, and did go ahead, but took three weeks instead of the scheduled three days, largely because of the bus row. A decision was due in April, then it was to take another six to eight weeks, then it was to be delivered on August 6th. A spokesman for the board said it will now be decided on October 5th. The council said this was news to it.

The development of housing in Poolbeg is less bungling error and more Greek tragedy.

More than 15 years ago, the council began developing plans for a new urban quarter in Poolbeg.

Then, in 2006, the State, through the Dublin Docklands Development Authority (DDDA), got into bed with property developers and bought the site of the old Irish Glass Bottle Company for €412 million.

After the crash, the value of the Glass Bottle site was knocked down to about €30 million. That disastrous saga spun out for several years, until in 2012 then minister for environment Phil Hogan announced the DDDA would be abolished and its powers transferred to the council.

This did not happen until 2016, and in fairness to the council it got working on plans for the site and the surrounding Poolbeg lands straight away, securing Cabinet approval in May of that year to create a strategic development zone.

A plan for up to 3,500 apartments was drawn up, 10 per cent of which would in the normal course of things be reserved for social housing. But councillors fought hard to increase this figure and, in May of last year, a deal was agreed with then minister for environment Simon Coveney, Nama and receivers, that State funding would be made available to bring the number of social and affordable homes up to 900.

The spanner in the works came with an appeal to the board by the receivers against the social housing numbers. This, Mr Keegan said last April, was a shock. Almost on the steps of the hearing, receiver David Carson told the council he would enter into negotiations on the social housing provision, but for legal reasons he was continuing the appeal.

The board’s spokesman said the College Green delays were down to the “extreme complexity” of the case, but the Poolbeg delays are just a result of the huge backlog of cases waiting to be dealt with. Large-scale strategic housing developments (SHDs) are being prioritised, he said, but these delays must raise concerns for those seeking to get shovels in the ground.