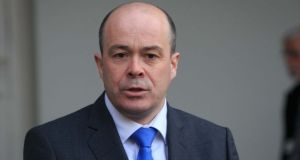 Denis Naughten: ‘Globally people are looking to Ireland because we are the first country in the world to bring high speed broadband to every home in the country’

Minister for Communications Denis Naughten has claimed Ireland will be the first country in the world to bring broadband into every home.

The Independent Minister said more than 90 per cent of homes in the State would have access to high speed broadband by the end of 2020.

Mr Naughten said the State supported National Broadband Plan, under which high-speed internet is guaranteed in more remote areas, was entering its final phase with final proposals from three shortlisted bidders - Eir, Siro and Enet - due for submission by the end of September.

The tenders for the contract to supply high speed broadband to 541,000 such homes would then be assessed before a company is chosen to deliver the service.

“There are complex logistical challenges and we have to acknowledge if people are in isolated homes on the sides of mountains it’s going to take longer to deliver broadband than to many other rural communities...”

Delivering high speed broadband to these more isolated homes will be more costly but the Minister said he was committed to the project and every house would having access to a minimum of a 30mbps service.

He said that whatever solution ends being used by the successful bidder for the tender would be “future proofed” as the contract is for the next 25 years.

“This is a 25 year contract - it’s not just for today and tomorrow - it’s for the next decade and the decade after that - and globally people are looking to Ireland because we are the first country in the world to bring high speed broadband to every single premises and home in the country.”

Mr Naughten was speaking in Crookhaven, Co Cork where he unveiled a sculpture by artist Susan O’Toole to mark the opening more than a century ago of a radio transmission station by communications pioneer Gugliemo Marconi at Brow Head.

Mr Naughten said Marconi’s success in picking up a signal at Brow Head from Poldhu in Cornwall more than 220 miles away was critical to the development of wireless telegraphy at sea.