State ‘is not doing enough for terror attack victims’ 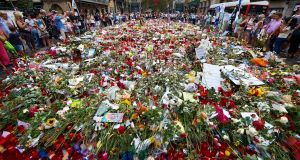 Flowers and candles are placed in tribute to victims of the recent terrorist attack in Las Ramblas, Barcelona, Spain. Photograph: Alejandro Garcia/EPA

The State is not doing enough to support Irish citizens who are caught up in terrorist attacks, a victim support group has said.

The Republic currently has no dedicated service for victims of either domestic or foreign terrorism. Responsibility for helping victims is shared between the Department of Foreign Affairs, the HSE, and victim support groups.

A Department of Justice spokesman said that victims of terrorism abroad are supported by the State’s “Embassies and consular services in other states and through its crisis centre in Dublin”.

However, the founder of the Victims’ Rights Alliance, Maria McDonald, has said support for terrorism victims requires a single specially-trained organisation and needs to be integrated into all emergency planning.

“The difficulty is that, even though we have incredible victim support organisations that deal with trauma, we do not have anyone skilled in relation to terrorism. The unique nature of terrorism means there is a need for the current services to be upskilled to make sure victims have the support they need.”

Ms McDonald used as an example the Irish family who were injured in this month’s terrorist attack on Las Ramblas in Barcelona. She said the family of four will likely require psychological as well as medical support now that they are back in Ireland.

People who witness attacks or suffer a near-miss also require support on their return home, support which is not being provided, Ms McDonald said.

Ms McDonald said the State also needed to follow the lead of other countries and have signs at airport arrival halls informing people who were caught up in attacks of the support that is available to them.

Currently, victims of terrorism abroad are referred to one of the existing victim support groups, such as Support After Homicide.

She said there was no specialist support on offer through the helpline and that callers were offered non-specialist counselling.

The State has indicated it will sign up to the new EU directive on counter-terrorism, which will come into force in September 2018. This will require the State to provide short-, medium- and long-term victim support. Any terrorism response plan will also be required to have victim support integrated into it.

Ms McDonald said the State is currently far behind other countries in its response to terror attacks.

“In France, victim support is part of the crisis-management plan, same for what happened in Brussels, where one of the first things they did was take the names of people who would need support,” Ms McDonald said.

The State’s current emergency planning framework dates to 2008 and does not include provisions for supporting victims of terror. It also fails to consider more modern forms of terrorism, such as the vehicle attacks seen in European cities in recent years.

The Department of Justice said that “in the context of national major emergency management arrangements, the HSE is responsible for psychosocial support for those affected by an incident, whether here or abroad”.

However, Ms McDonald said the current state of Ireland’s mental-health system meant the HSE would be incapable of providing adequate psychological support in the event of a mass terror attack in Ireland.

“You see how long it takes to get a bed here. Imagine the HSE dealing with a terrorist attack, where it is imperative to get immediate support,” Ms McDonald said.