EU tells UK to get ‘serious’ as Brexit talks resume 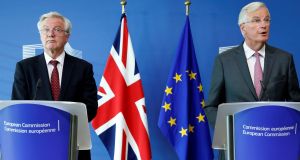 Brexit negotiations between the European Commission and the UK got under way in Brussels on Monday evening, with the two sides scheduled to discuss the peace process and the Common Travel Area between Ireland and Britain over the next three days.

However, the EU’s growing impatience with the British government showed no sign of abating.

The EU’s chief negotiator, Michel Barnier, faced the press briefly when welcoming the British Brexit secretary, David Davis, to European Commission headquarters. Mr Barnier said he was looking forward to working with Mr Davis this week, but then added: “To be honest, I am concerned. Time passes quickly.”

Mr Barnier made it clear that the European Commission needed more openness from Britain on the divorce deal before future relations and transitional arrangements could be discussed.

“We need you to take positions on all separation issues,” said Mr Barnier. “This is necessary to make sufficient progress. We must start negotiating seriously. We need UK papers that are clear in order to have constructive negotiations. And the sooner we remove the ambiguity, the sooner we will be in a position to discuss the future relationship and a transitional period.”

In response, Mr Davis said Britain was ready to “roll up its sleeves” to get a deal.

He said that if the sides were to make progress , it would “require flexibility and imagination from both sides”.

However, the meeting between the two men lasted only an hour, Brussels sources said, after which Mr Davis returned to London, leaving his officials to proceed with the talks on Tuesday.

Two days of meetings between the working groups for each side follow on Tuesday and Wednesday, and the full plenary session with reconvene on Thursday to assess progress.

There is also a strand on Ireland, led by the negotiating chiefs’ deputies, Olly Robbins for the UK and Sabine Weyand for the EU.

EU impatience with the British over a failure to engage in detail in the negotiations has intensified, despite a series of papers published by the UK in the past fortnight. While EU officials acknowledge that the papers show that the British side is becoming more involved in the technical details of the negotiations, some of the papers – including suggestions about the Irish Border – were shot down by Brussels.

The British government is seeking to talk about the future trading relationship between the UK and the EU, but the EU says it will refuse to discuss these subjects until it is satisfied sufficient progress has been made on the “separation agreement” – including the rights of EU citizens in the UK, and vice versa, and the size of the divorce bill the UK must pay on exit.

The third item the EU wants to see progress on is matters relating to Ireland, but the British government has pointed out that until the future trading relationship is agreed, the future of the customs border will be uncertain.

Meanwhile, Minister for Foreign Affairs Simon Coveney, who is in Belfast for discussions with academics and business leaders on Brexit, said that the current position of the British government was “unsustainable”.

Mr Coveney told The Irish Times: “The British government is seeking to stay in the single market and the customs union and at the same time do trade deals of its own.

“Essentially it is seeking shelter from the European Union and the sunshine on the outside. It wants the best of both worlds, and that is not going to work.

“Britain is trying to sell the notion that it is reclaiming its sovereignty and securing trade advantages while insisting its economy is so important to other EU countries that it requires free trade. The two positions are not compatible.”