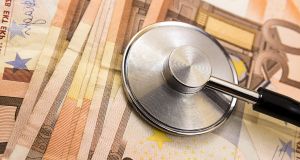 “We cannot look at payments in isolation. We must also look at what the GP is delivering in terms of care in the community,” said one doctor. Photograph: iStock

The more than €540 million paid by the Health Service Executive to GPs last year was money “very well spent”, Minister for Health Simon Harris has said.

Speaking after the publication of payments under the general medical services scheme, which showed one GP practice was paid more than €952,000, the Minister said the fees were paid for services delivered in communities.

“General practice is one of the better-performing areas right across the health service and is generally held in high regard by all communities,” he said.

Mr Harris also said he wanted to see further resources put into general practice, so doctors could “continue to deliver new and enhanced services in the community” as part of the new GP contract, currently being negotiated.

The average payment was €186,000 across almost 2,900 GP practices and co-operatives. GPs pay overheads – including salaries for nurses and other doctors as well as practice expenses – out of these payments. Most GPs also earn separate fees for treating private patients.

The highest-paid co-operative, with fees of €3.3 million, was CareDoc in Carlow and Kilkenny.

In a statement, the association pointed out the funding did not represent GPs’ take-home pay and covered care for patients “24 hours a day, seven days a week, 365 days a year”.

“GPs receive, on average, €9 per month for each medical-card patient, irrespective of whether they attend once or 10 times over that month,” he said. “The reality is that these payments do not cover the cost of that care.”

He said the published figures contribute to business costs, the largest of which is staff costs – GPs employ other GPs, nurses and administrative staff to deliver “a high level of service to their patients”.

He also said that GPs, even as their business costs were rising, suffered disproportionate cuts under the financial emergency measures in the public interest legislation introduced after the economic crash.

“The impact of these cuts is being felt by patients as pressure on GPs increases waiting times for an appointment,” he said.

Dr Austin O’Carroll, who works in north-inner-city Dublin and received one of the highest payments – almost €790,000 – said his practice employs nine GPs as well as support staff. He also runs 18 clinics in seven locations for homeless people and has more than 2,000 patients, 95 per cent of whom have medical cards.

“We cannot look at payments in isolation. We must also look at what the GP is delivering in terms of care in the community,” he said.

Details of the payments were released to RTÉ under the Freedom of Information Acts.

Critical care may not be directly delivered by ICU medics if cases surge, doctor warns