Greta Thunberg column is most read Irish Times article of 2019 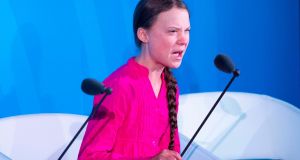 Columnist Jennifer O’Connell’s comment piece about Greta Thunberg is the most read Irish Times article of 2019 and the most read in the history of the website.

The column was published on September 7th, when the climate-change activist was crossing the Atlantic in a yacht.

Under the headline, ‘Why is Greta Thunberg so triggering for certain men?, Ms O’Connell criticised the “vicious and the most fatuous kind of playground bullying” directed at the Swedish teenager.

O’Connell’s article supplanted Fintan O’Toole’s comment piece “trial runs for fascism are in full flow” as the most read article in the history of The Irish Times website.

Thunberg’s status as Time magazine’s person of the year is reflected in other most read stories on The Irish Times website.

Thunberg related stories also appear at No 6 “Bjorn from ABBA hits back at Greta Thunberg haters” and at No 15 “Decades before Greta we were warned about climate change”.

The second most read story in 2019 was crime correspondent Conor Gallagher’s long read on the Ana Kriégel murder trial. Ms Kriégel died in May 2018 in Lucan, Co Dublin. Two teenagers, Boy A and Boy B, were convicted of her murder.

It is also the 12th most engaged story internationally in 2019 according to Chartbeat which monitors page views for much of the world’s prominent media organisations.

Boy B’s father’s response to the verdict in the case was the eighth most read story of the year.

The third most read story was Miriam Lord’s defenestration of American vice-president Mike Pence’s visit to Ireland in September. The headline told the story: “Miriam Lord: How Mike Pence shat on the new carpet in Ireland’s spare room.”

The fourth most read story was the Brexit-related mix-up in the BBC when it juxtaposed a story of then British prime minister Theresa May arriving in Brussels with a World War II fighter plane coming in to land. It was a rare moment of levity in the protracted Brexit debate.

The fifth most read story headlined “Gardaí seek help in finding missing Irish Times journalist” was about the search for Kate Holmquist who died in August.

Fintan O’Toole’s “Ireland can stop a no-deal Brexit” was the seventh most read.

The ninth and 10th most read were both about young women who died prematurely.

The ninth by Derek Scally was about the suicide of Trinity College Dublin student and blogger Sophie Hingst who died following an article in Der Spiegel which accused her of inventing 22 Holocaust victims.

The 10th most read was about the discovery of the body of Nora Quoirin, the Irish teenager who died in mysterious circumstances while on holidays in Malaysia.

Bjorn from ABBA hits back at Greta Thunberg haters

Fintan O’Toole: Ireland can stop a no-deal Brexit. Here’s how

‘Bunch of scumbags’: Father of Boy B loudly condemns verdict

‘I have cried every day since I returned to Ireland’

Woman dies in fall from Ilac shopping centre in Dublin

Decades before Greta we were warned about climate change

Before you leave a tip in an Irish restaurant, read this

Boris Johnson on Varadkar: ‘Why isn’t he called Murphy like all the rest of them’"

Man treated in hospital after injecting himself with own semen