Malaysian police have confirmed that a body has been found in the area where teenager Nóra Quoirin went missing on August 4th. Video: Reuters 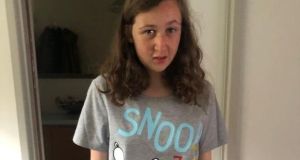 The body found in a Malaysian rainforest on Tuesday was that of missing Irish teenager Nóra Quoirin, police have confirmed.

The Lucie Blackman Trust, which assisted the 15-year-old’s family, said in a statement that it was confirming “with great sadness that the body found today is that of missing teenager Nóra Quoirin”.

The charity urged people to please respect the family and “not approach them at this difficult time”.

A spokesman for the trust added: “All at The Lucie Blackman Trust are thinking of the family and continue to support them as they come to terms with this news.”

Earlier, police in Malaysia confirmed that a body had been found on the 10th day of the search for Irish teenager.

Police said that the body found in the rainforest had been flown by helicopter to a hospital. Nóra’s parents were asked if they could identify the body as being that of their daughter.

Deputy inspector-general of police Mazlan Mansor told reporters that at about 1.57pm on Tuesday (local time) one of the search-and-rescue teams was informed that a body had been found about 2km from the Dusun resort.

Mr Mazlan said that the place where the body was found was in the area covered by search-and-rescue teams. He declined to comment on whether the body, which he said was found unclothed, had any visible injuries and said that police needed to await the postmortem before commenting on this.

Police said that the body was discovered by a volunteer who was assisting in the search.

Negeri Sembilan police chief Mohamad Mat Yusop had said earlier that a body had been found: “I can confirm a body has been found in the Berembun mountains. It is not in an accessible place.”

President Michael D Higgins expressed his sympathy to Nóra’s family and thanked the Malaysian authorities and volunteers for their assistance in the search.

“Our thoughts and prayers are now with Nóra’s family, at this most difficult time. Ar dheis Dé go raibh a h-anam.”

Taoiseach Leo Varadkar offered his condolences to Nóra’s family. He said on Twitter: “They have experienced every family’s worst nightmare. I’d like to pay tribute to everyone who searched for Nora. May she rest in peace.”

The Dunsun resort is near the town of Seremban, which is about 63km from the Malaysian capital Kuala Lumpur.

Mr Mohamad told reporters that the state’s deputy police chief, Che Zakaria Othman, and police from the forensics immediately went to the area.

The London-based Quoirin family had only checked in to the Dusun resort on August 3rd, intending to stay for a two-week holiday.

Nóra’s father, Sebastien, raised the alarm when he discovered that his daughter, who had learning and developmental disabilities, was not in the bedroom she was sharing with her younger siblings. The teenager, with a Northern Irish mother and French father, was travelling on an Irish passport.

Nóra’s mother, Meabh, said on Monday: “Nóra is our first child. She has been vulnerable since the day she was born. She is so precious to us and our hearts are breaking.”

The teenager’s family had offered a reward of 50,000 Malaysian ringgit (about €10,600) for information leading to her return.

Nearly 350 search-and-rescue personnel had been involved in the effort to find Nóra.

Expert indigenous trackers from the Senoi Praaq special unit and members of the elite 69 Commando unit of the Royal Malaysian Police have been involved in the search and helicopters and drones equipped with thermal imaging cameras were deployed.