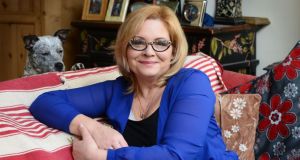 Friends and colleagues have paid tribute to the Irish Times journalist and author Kate Holmquist, who died at the weekend, at the age of 62.

Kate Holmquist’s great gift as a writer was to be able to recognise the power of people’s stories and then tell them on their behalf, according to her friend Sheila Wayman, who was the newspaper’s features editor between 1998 and 2006.

“She didn’t flinch from the earthiness of life and was ahead of her time, certainly in The Irish Times, in writing with candour about ‘women’s issues’ that could make older male colleagues’ toes curl,” she says. “An eye for life’s quirks and absurdities also informed her always-entertaining commentary on some latest fad or light-hearted news story.”

Kate Holmquist’s versatility and professionalism were priceless, according to Wayman. “She was as generous and creative in generating ideas as she was in enthusiastically embracing those thrown at her, always a can-do person – even if that meant staying up all night to meet the deadline. An editor’s half-baked notions always looked better once they had been through Kate’s hands. She was as adept at crafting long reads as she was at writing quick-turn-around pieces.”

Kate Holmquist never shied away from difficult topics such as sexual abuse, pornography, homelessness and prostitution. One notable interview was with Rachel Moran, author of Paid For: My Journey Through Prostitution.“Kate was lovely – inquisitive but sensitive too,” she says. “She understood exactly the exploitative nature of prostitution without needing to have experienced it or have it explained to her. She had a commitment to justice that you could see and feel; there was just an internal sense of fair play that was very strong within her.”

The philosopher Richard Kearney, a professor at Boston College, in Massachusetts, and his wife, Anne, first met Kate Holmquist in the late 1970s, in Paris. He was a doctoral student at the University of Paris; she lived with an Irish writer in the city for about a year before moving to Ireland. Kearney says she had a boundless love and enthusiasm for everything French – the art, the literary and intellectual life, the films and plays. “She had a special love of theatre,” he says. “She loved deep animated conversations into the early hours of the morning. She had a rare and disarming passion for life.”

The writer and publisher Dermot Bolger knew Kate Holmquist well in the late 1980s and early 1990s, when his Raven Arts Press published both Bald Head, the cancer memoir of her husband, Ferdia Mac Anna, and Holmquist’s memoir, A Good Daughter, after the death of her mother. “Her memoir was honest, courageous and beautifully told. I always felt it never fully received the attention that her elegant prose and unconditional honesty deserved,” he says. “I can still see her at my kitchen table with my late wife, Bernie, their heads bent together in laughter, and although there was pain in her memoir it is this sense of radiant happiness and generosity of spirit that lives with me.”

Seán Love, executive director of Fighting Words, the creative-writing initiative for young people, collaborated with Kate Holmquist on The Irish Times’s annual Fighting Words supplement. “She was a pleasure to work with, a lovely woman with a warm personality. The Fighting Words supplement is our flagship project which gives young people a platform for their work to be seen. Kate got that whole concept, and the supplement is consistently beautifully produced by The Irish Times. Kate and I jointly received the Business to Arts award from the minister for arts, Jimmy Deenihan, for the best educational supplement produced in Ireland in 2013.”

The clinical psychologist Dr Marie Murray, a former director of student counselling services at University College Dublin, was one of the many experts whom Holmquist contacted when she was writing about children and parenting. “I found that her questions were always apt and she was on top of her brief, and when I read her pieces she captured accurately what I said and meant,” Murray says.

Kate will be sorely missed by her friends and colleagues.