As the BBC wrapped up their News at Six show on 30th January, their round up featured news on Brexit - with a twist. Video: BBC News 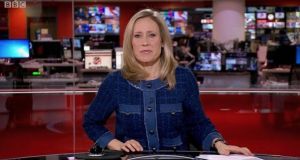 Sophie Raworth kept her cool during the BBC News Broadcast

A “simple human error” by BBC producers made it appear as if Theresa May was travelling to Brussels in a fleet of second World War planes to reopen negotiations with the EU.

The section was meant to be accompanied by footage of Mrs May.

Instead, clips showing planes over the air base were shown,  suggesting Mrs May was travelling to Brussels in a fleet of RAF bombers.

Raworth told viewers: “Theresa May says she intends to go back to Brussels to negotiate her Brexit deal but EU leaders say the deal is done and they will not reopen talks.”

Mrs May said she intends to go back to the EU and reopen negotiation over the Irish backstop but some of the EU’s most senior politicians and officials have lined up to insist the deal cannot be unpicked.

Paul Royall, who edits the News at Six and News at 10, said on Twitter the clips had been intended to tease a later story about the airbase. He joked he was “pretty sure” Mrs May was not travelling to Europe in a warplane.

Mr Royall said: “For those wondering - simple human error at end of #BBCNewsSix.

“A production mistake meant pictures used earlier to tease story about Biggin Hill ended up in our top story recap at close of show.

“If and when it happens pretty certain PM not travelling to Brussels like this.”

Best known for its role in the Battle of Britain, Biggin Hill served as one of the vital command bases for the Hurricanes and Spitfires of RAF Fighter Command protecting the south-east. - PA