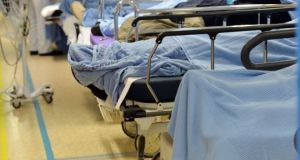 The Irish Nurses and Midwives Organisation said there were 573 admitted patients waiting on trolleys for beds on Monday morning at hospitals across the State. File photograph: Alan Betson

Speaking following a briefing from the HSE’s winter oversight group on Monday, he said there were indications the flu season had arrived earlier than normal.

HSE assistant national director for public health Dr Kevin Kelleher confirmed 19 people have died so far this season as a result of the flu virus.

Last week the HSE said people with the flu or flu-symptoms were accounting for half of all patients in hospital emergency departments waiting to be admitted to beds, adding to the serious strain on the health service in recent weeks.

At that stage 18 people had died from the illness, with up to 100 people expected to die before the flu season ends, it said.

Mr Harris said there had been very high trolley numbers in November and in the run up to Christmas. However there was some cause for hope that the flu season may be peaking now and may begin to decline in coming weeks, he said.

Everything possible was being done to deal with any post-Christmas spike in numbers on trolleys he said, and that an additional 199 beds would be opened in hospitals by the end of January with about 30 of these coming on stream in the days ahead.

The Irish Nurses and Midwives Organisation said there were 573 admitted patients waiting on trolleys for beds on Monday morning at hospitals across the State - 424 waiting in emergency departments and 149 in wards elsewhere in hospitals. The highest number was at Cork University Hospital, where there were 54 patients on trolleys.

The Minister forecast the coming weeks would be very challenging for the health service.

She said this figure was nearly 11 per cent higher than the previous week and 25 per cent more than at the same time last year.

Those over 75 who were admitted to hospital tended to have longer lengths of stay, she added.

Emergency medicine consultant Dr Fergal Hickey said the real reason why so many people are on trollies is the lack of available beds.

He said the flu season is “incredibly predictable. This causes a surge in demand and the system falls over”.

Dr Hickey, who works at Sligo University Hospital, predicted the situation would be a lot worse if elective or planned surgeries had been taking place, but most do not start again until the New Year.

He warned hospitals may have to postpone starting elective surgeries again as the flu will have an adverse effect on the availability of beds. “We haven’t got capacity to do both at the moment.”

Separately the Minister announced additional funding of €500,000 on Monday to develop the national organ retrieval service next year “with a view to enhancing our current organ donation infrastructure to be comparable with the best international standards”.

He said 237 transplants had been carried out this year including a record number of lung transplant procedures.

He plans to bring forward legislation within the first three months of 2020 to change organ donation laws. “This legislation will provide for a soft opt-out system. I would encourage people to have those conversations with their loved ones.

“Organ donation can be the gift of life for some people and I really hope families across the country can have these difficult conversations and help us to do everything we can to increase organ donation and save lives.”

“We are pleased to see the rate of organ donation and transplant in 2019 remain in line with last year. Organ donation continues to be a rare event; of 31,000 deaths each year in Ireland, we see an average of 80 multi organ donations per annum. This continues to reflect positively on the generosity of Irish society and the professionalism of the intensive care, surgical teams, medical and nursing staff who look after patients and their families.’’