Man treated in hospital after injecting himself with own semen 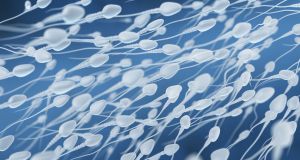 A 33-year-old man required medical treatment at a Dublin hospital after repeatedly injecting himself with his own semen in an unusual attempt to treat his longstanding lower-back pain. Image:iStock.

A 33-year-old man required medical treatment at a Dublin hospital after repeatedly injecting himself with his own semen in an unusual attempt to treat his longstanding lower-back pain.

The man developed a subcutaneous abscess on his right arm, where he had been injecting himself on a monthly basis for 1½ years. A radiograph also revealed emphysema and oedema – excess watery fluid – under his skin.

An intravenous antimicrobial drip to treat the problems was started immediately, but he opted to discharge himself without allowing doctors to make an incision to drain the “local collection”.

The case was revealed in a report published by the Irish Medical Journal titled ‘Semenly’ Harmless Back Pain: An Unusual Presentation of a Subcutaneous Abscess.

The author of the case report, Dr Lisa Dunne of Adelaide and Meath Hospital in Tallaght, decided to conduct a review of sources of information regarding the use of semen for the treatment of back pain or other conditions.

She concluded that there were no other reported cases of intravenous semen injection to be found anywhere in medical literature, and a broader search of the internet found no source that recommended this as a cure.

The patient had presented in hospital complaining of sudden and severe lower-back pain. He said he had lifted a heavy object three days before, after which his symptoms worsened.

A physical examination of his upper and lower limbs identified a small, red papule on his right arm. He disclosed at this stage that he had been injecting his own semen as an “innovative” method of treating back pain.

He had devised this cure independent of any medical advice, and revealed that injected one monthly “dose” of semen for 18 consecutive months using a hypodermic needle that he bought on the internet.

The red area spread down his arm and hardened around the entry wound over the course of the next 24 hours, according to the case report.

Dr Dunne described the case as “unique” and said it demonstrated the risks of innovative treatments that are relied upon prior to clinical research in the form of phased trials.