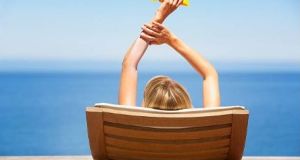 Microbeads, found in some sunscreens, have become infamous for their impact on marine environments. File photograph: iStockPhoto

The manufacture and sale of products containing microbeads have been banned in the Republic after a Bill was signed into law on Thursday.

The Microbeads (Prohibition) Bill 2019 bans certain products containing microbeads and the disposal of substances containing them, including cosmetic and cleaning products that can be dissolved in water.

Microbeads are small plastic particles that are at most 5mm in diameter. They are found in products such as toothpaste, body wash, face scrubs and cleaning agents. They are also found in medicinal products and sunscreen, but such products will be exempt from restrictions imposed by the Act.

The beads have already been banned in countries including Canada, the US and UK.

Microbeads have become infamous for their effects on marine and freshwater environments. A report conducted by researchers at the Galway-Mayo Institute of Technology highlights their potential risk to such environments, with microbeads having been detected in fish and other marine species.

The report also warns of the potential risk to human health, including through the consumption of species which have been exposed to microbeads, and through bathing and other recreational activities.

Moves have been made in the past for the Government to impose a ban on microbeads, including a proposed Bill in 2016 by then-senator and current MEP Grace O’Sullivan (Green Party).

Concern has been raised about the impact this Act could have on Irish companies which manufacture and sell products containing the beads.

In an opening statement to the Oireachtas Joint Committee in February 2019, Siobhán Dean, director of the Irish Cosmetics, Detergent and Allied Products Association (ICDA) said any proposed ban on microbeads in products would have an impact on Irish manufacturers and would remove products from Irish shelves until they could be redeveloped.