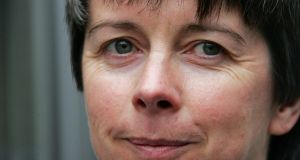 Louise O’Keeffe won her case in the ECHR over abuse she suffered at the hands of school principal Leo Hickey at Dunderrow National School in Co Cork in the 1970s. Photograph: Courtpix

The Department of Education has been accused of misrepresenting the way it has responded to the European Court of Human Rights (ECHR) judgment in the Louise O’Keeffe case by seeking to suggest it was generous in its settlement of cases brought by the victims of child sexual abuse in Irish schools.

Deputy director of the Child Law Clinic at University College Cork, Dr Conor O’ Mahony, said an action plan submitted by the Department of Education to the Grand Chamber of the ECHR suggesting Ireland was responding in a generous manner to the O’Keeffe judgment was “to say the least, putting a positive spin on things”.

Dr O’Mahony said that the department had told the Grand Chamber that it was adopting a “flexible and holistic approach” to cases for compensation brought by other victims, but the reality was that the Irish State was quite selective in its interpretation of the ECHR judgement.

Ms O’Keeffe won her case in the ECHR over abuse she suffered at the hands of school principal Leo Hickey at Dunderrow National School in Co Cork in the 1970s after the Irish courts ruled the Department of Education was not liable because the school was under church management.

The judgment paved the way for other victims of abuse in Irish schools to take civil actions but the department interpreted the ECHR ruling as only applying where there was a prior complaint of abuse and where the State had failed to act in response to that complaint.

In its action plan submitted to the Grand Chamber, the State pointed out that the government had authorised the State Claims Agency in 2014 to offer “out of court” settlements to people taking cases for abuse that fell within the terms of the ECHR judgment in the O’Keeffe case.

It also revealed that in 2015, it agreed to offer ex-gratia payments to those who had initiated actions for damages but had discontinued them and where the complainant could demonstrate that there was a prior complaint of sexual abuse to a school authority.

According to the Government submission, the SCA made settlement offers in seven of the 35 extant cases and six of these have been accepted while one was withdrawn following the death of one of the litigants in August 2015 with payments of €84,000 being made in each of the remaining six cases.

The SCA wrote to the other 28 litigants in March 2015, advising them that their circumstances did not appear to fall within the parameters of the O’Keeffe judgment but inviting them to submit any contrary evidence, but to date none of these litigants have submitted new evidence.

But Dr O’Mahony told The Irish Times that while the Irish submission makes it appear that the state was adopting a progressive and sympathetic approach, the reality was somewhat different as in addition to the 35 mentioned cases, there were a further 49 discontinued cases.

“The state says it offered settlements in seven out of 35 cases but if you add the 49 discontinued cases where they say they made payments in five cases that gives you a total of 12 settlements out of 84 cases which is a settlement rate of around 14 per cent which is a pretty low figure.

“And the reality is that it is actually lower because according to previous information furnished by the department, there were a potential 360 case that they were aware of so only 84 of these results in applications for damages and only 12 have resulted in settlement which is just over 3 per cent.”

Dr O’Mahony said the department had “cherrypicked one paragraph in the O’Keeffe judgement about ‘prior complaint’” and ignored other paragraphs and had sought to present itself now as adopting “a holistic and flexible approach” to dealing with victims when this was not the case.

“The state’s approach to this has been designed with one purpose in mind and that is to prevent people who were abused in Irish schools from getting compensation and it’s been remarkably successful at doing so,” said Dr O’Mahony who assisted Ms O’Keeffe’s lawyers in her ECHR case.

Reopening cultural centres ‘must be a priority’, says Arts Council 21:40
Tánaiste did not ‘instruct’ McEntee to appoint Woulfe 21:31
Judges must be seen to be able to ‘speak truth to power’, North’s Chief Justice says 20:53
Third-level colleges aim to resume more face-to-face teaching early next year 20:49
Government moves to seek reforms as part of new public service accord 20:49