Snow hope but weather likely to get wet and windy instead 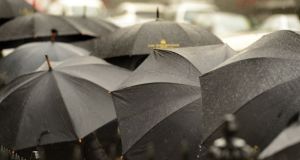 The prospects of a white Easter appear to be receding as Met Éireann predicts a wet and windy few days - with a slightly unknown factor”some uncertainty” moving in on Sunday or Monday.

The British Met Office had predicted widespread snow for Easter Sunday saying it is “most likely” over the northern half of Britain. However this was toned down on Friday with the UK forecaster agreeing with Met Éireann that wet and windy conditions were more likely.

Met Éireann said mist, fog and frost will clear on Saturday morning with scattered rain showers during the day. The showers will be lighter than recent days and there will be a lot of dry bright weather but still more cloud than sunny spells.

Temperatures will drop to about minus one at night with highest daytime temperatures of 6 to 9 possibly 10 degrees. There will be “ brisk” northeast winds along Irish Sea coasts.

The outlook for the weekend is cool and showery, with some risk of hail and thunder.

The met office said however there was “some uncertainty for the later stage of the Easter Weekend.”

Current indications suggest a nearby area of low pressure will throw up organised bands of heavy blustery rain on Monday , with threat of some wintry falls. The details remain uncertain at this stage, but it seems this is the best chance of snow.

Met Éireann forecaster Harm Luijkx said the continuing cold weather in Ireland was the result of atmospheric turbulence which had forced the jet stream to drift to the north of Ireland.

During this winter and spring the jet stream had become disturbed and “Ireland is stuck on the wrong side of it”, he said.

He said a similar weather phenomenon in 2013 had also resulted in a colder than normal Spring.

When the jet stream is over Ireland it brings the mild and wet weather normally associated with this time of year.