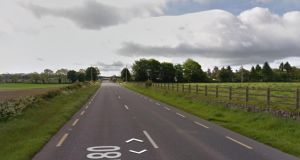 File image of the area on the N80 outside Bunclody, Co Wexford, where a school bus carrying about 20 children was involved in a collision with two cars on Thursday. File photograph: Google Street View

Motorists had narrow escapes in separate incidents on Thursday as road safety authorities stepped up appeals for people to take extra care on the roads over the upcoming Easter weekend.

On the N80 near Bunclody, Co Wexford, a school bus carrying about 20 children was involved in a collision with two cars.

None of the children was injured but a woman driver aged in her 20s, was taken to Hospital and was said to be in a serious condition.

In Co Galway, a number of people were taken to Portiuncula Hospital following a collision involving 12 cars. Gardaí said the collision took place after 5pm on the M6 between the Ballinasloe exits of Junction 14 and Junction 15.

Gardaí have urged motorists to take extra care on the roads over the coming days and to be mindful of the forecasted poor weather.

Met Éireann said the outlook was for cool and showery weather with the risk of hail and thunder. There was some uncertainty for the later stage of the Easter weekend but likely to be wet and windy. Saturday night is likely to be very cold with frost and possibly some ice setting in later. lowest temperatures of minus three degrees.

Minister for Transport Shane Ross urged motorists to repeat the success of last Easter when there were no fatal crashes on the States road’s. He said this year was “the first Good Friday since 1927 when people can go to their local pub” and he urged all those who do so to “leave the car at home, organise alternative transport or select a designated driver if you are with friends”.

“Easter 2017 was remarkable in that there were no deaths on Irish roads over that holiday weekend. However, since 2012 a total of 59 people have been killed and seriously injured in Easter Bank Holiday crashes, according to figures released by the Road Safety Authority and An Garda Siochána.”

“I would ask all drivers to be aware of the effect of alcohol, and indeed drugs, on their driving”, he said.

Irish Rail has warned intending rail passengers of extensive disruption and cancellations of some services over the weekend. Major maintenance work is taking place over the Easter weekend affecting all Heuston routes, Northside Dart, Drogheda and Belfast services.

Hundreds of Irish Rail staff and contractors will be involved in track and signalling works, and the company is facilitating Kildare County Council in road underbridge works at Sallins.

These works will result in bus substitutions on some services.

On the Dublin Heuston to Waterford services upgrading of the signalling system at Kilkenny will see schedules suspended until Monday. Bus transfers will be in operation between Heuston and Waterford. A revised schedule will be in place.

The Dublin Heuston to Newbridge/Kildare service will be affected by works on the Sallins road bypass , until Tuesday.

The Dublin to Hazelhatch commuter services will operate to a revised schedule.

Full services on these routes will resume from 12.30pm on Easter Monday, April 2nd.

Belfast Enterprise services will operate as a bus transfer between Dublin Connolly and Drogheda, with a train service between Drogheda and Belfast.

Northern commuter services will operate to a limited schedule between Drogheda and Skerries, with a bus transfer between Dublin Connolly and Skerries.

Full services on these routes will resume on Easter Monday.

Dart services will not operate between Howth/Malahide and Dublin Connolly. Dart services between Connolly and Bray/Greystones remain unaffected. Dublin Bus will accept rail tickets on northside routes during this time. Full details of service arrangements are available at irishrail.ie.